The contract is part of the Australian Government's recent $12.2 million investment in Australian industry contracts to increase the Army's experimentation, prototyping and exploration of autonomous vehicle and emerging technologies.

It also confirms the Department of Defence's commitment to IISRI's Leader-Follower autonomous vehicle technology program, with a previous $2.9 million contract awarded in late 2018 providing for the development phase of the project.

The new contract provides for the second phase of the project, which involves expansion and prototyping and brings the Australian Army's ttotal investment in the program to $6.3 million.

Deputy Vice-Chancellor Research and Alfred Deakin Professor Julie Owens said Deakin is proud to continue providing world-class technology for the Australian Defence Force in a partnership that first began in 2006.

"Deakin is uniquely geared towards providing solutions to real-world problems and we are proud of our track record and successful past delivery of projects for our clients, including the Australian Army.

"It is a privilege to play a role in protecting Australia and bringing greater prosperity to Australian society."

IISRI Director Professor Saeid Nahavandi explained that the particular technology under development for the Australian Army relates primarily to large vehicles in the first instance, with a specific focus on convoys.

"The technology is vehicle agnostic, furnished with a range of advanced sensors – powered by IISRI's home-grown software algorithms – which are advanced control and AI enabled and embedded in the vehicle control architecture to provide very safe and trustworthy manoeuvres," Professor Nahavandi said.

"This technology gives vehicles autonomous enormous capability so that a group of vehicles can move from A to B quite easily. Driving on a highway or cruising around an urban area is one thing, but our technology allows these vehicles to travel off-road in far more complex, unstructured, rough terrain – over river beds and through creeks – even when there's no markings on the ground."

Professor Nahavandi said the technology stems from his key research findings in haptics and robotics over the past 30 years. "One of the key advantages of this system is its adaptability – it can be retrofitted to old and new vehicles, providing a total vehicle agnostic solution for a range of transport including tanks, transporters, bulldozers and trucks," Professor Nahavandi said.

"Aspects of the bolt-on pack will also have the capability to be used in air and sea domains and the technology can easily be adopted in other non-defence sectors such as transportation and logistics, mining and agriculture, all of which are of immense value to the Australian economy." 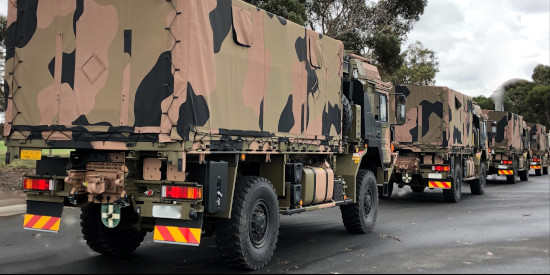 Deakin researchers work with AEC to improve the voting process

Deakin researchers are using computer simulation to support the Australian Electoral Commission with improving the voting experience in time for this year's Federal Election.

Deakin University has launched a new start-up business to share the power of its virtual reality firefighting simulator, the FLAIM Trainer.

Nearly two dozen Australian small businesses, including 14 from the Geelong region, will be supported through a Deakin-led project to deliver robotics-driven target systems to the Australian Defence Force.