Business confidence in Geelong’s economy continues to go from strength to strength with optimism high for future growth in a number of key industries.

Almost half of businesses surveyed in the third annual Geelong Business Trends Survey expect to hire more staff in 2017, while 79 per cent expect their sales to increase and 77 per cent anticipate a rise in profits for the current financial year.

Geelong Chamber of Commerce Chief Executive Officer Bernadette Uzelac is delighted by the results of the Business Trends Survey, a joint initiative between the Chamber and Deakin Business School, saying it’s a strong indicator that confidence in Geelong’s economy continues to grow.

“What’s pleasing is that several of Geelong’s key industries, including manufacturing, are very optimistic about the future direction of the region’s economy,” Ms Uzelac said.

“There’s been a slight overall rise from the previous year in the overall confidence of businesses, with 46 per cent of businesses expecting to hire more staff in the next 12 months.

“Our manufacturing sector, which has been the backbone of Geelong’s economy for more than a century, is reinventing itself from its `traditional’ base into new niche areas that will drive our economy forward.

Deakin University Vice-Chancellor Professor Jane den Hollander AO said it was pleasing the results in the Business Trends Survey indicated the local business community was as optimistic for Geelong’s future as Deakin.

“We are very positive about the future of Geelong, which is strategically progressing towards a smart city where wealth is created through education and jobs for the industries of the future,” Professor den Hollander said.

“We are seeing this come to fruition through the Geelong Innovation Precinct at our Waurn Ponds campus. In five years, the Precinct has led directly to the creation of over 1,000 jobs through industry partnerships and co-location opportunities.”

Deakin Business School’s Professor Barry Cooper said that the survey results were a reflection of a city that was embracing the challenges of change.

“As a city in transition, it is common to see some ups and downs in business performance,” Professor Cooper said.

“It was therefore encouraging to see that despite some businesses not being as profitable as expected, overall 89 per cent of those surveyed reported an increase or no change in the number of employees in 2016 with 46 per cent saying they expect to take on more staff in the future.”

“Some 25 per cent of respondents said poor local government leadership, policy or support was the greatest barrier to business growth, indicating the importance they place on support from the Geelong Council,” Professor Cooper said.

“As the survey was taken during the changeover in Council leadership, this result is not likely to be a reflection of the work of the current administrators. The results highlight an opportunity for the administrators, and future council members, to break down any barriers and partner with the local business community to ensure the continued economic growth of the city.”

Ms Uzelac said it’s pleasing to see overall confidence levels from Geelong business levels had significantly increased over the past two years, from 46 per cent to 62 per cent.

“Understandably, not all industry sectors are as confident with education, community services and government slightly lower than last year,” she said.

“Which is why the Chamber will continue to advocate to support these important growth sectors for Geelong to all levels of government so they can move forward with greater confidence.”

Click here to view a copy of the Deakin Business Trends Survey. 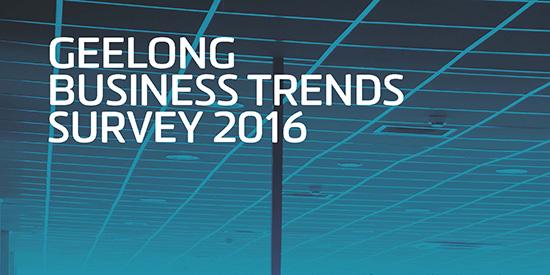