A Deakin University international law expert has published an analysis of the UN Security Council's condoning the use of force to broker peace, in a bid to help diplomats better understand and negotiate within the world's most powerful organisation.

The analysis, detailed in a new book from Deakin Law School's Dr Tamsin Paige, is the first to attempt to define what constitutes a 'threat to the peace' under Article 39 of the UN Charter.

Petulant and Contrary: Approaches by the Permanent Five Members of the UN Security Council to the Concept of 'threat to the peace' under Article 39 of the UN Charter, will be launched at the University's Docklands centre, Deakin Downtown, on 15 May.

Dr Paige said that for the past 70 years, since the UN's Security Council was established in the wake of World War II, what constitutes a 'threat to peace', and therefore where military intervention is warranted, has been intentionally undefined.

"So what I've done is look at the practice of the Security Council, in particular the five permanent members, to give a practical explanation of what they've decided in the past constitutes a threat to the peace," Dr Paige said.

"This will allow for greater predictability in what the Security Council is going to do in any given situation, and that matters because the UN Security Council is the most powerful organisation in the world. They are the only authority that can legally authorise the use of military force."

Dr Paige used a ground-breaking method to pull together her research for the book, an analysis tool called meta-synthesis that was developed in the 1990s and has never been applied to this area of study. She has already presented her work to the Australian diplomatic mission to the UN.

"This book will allow diplomats to better tailor their negotiations to veto nations, whether they're lobbying for or against a possible intervention," she said.

"It will help make diplomats' life easier, especially those in non-permanent nations like Australia who are only there for two years, so really need to hit the ground running."

The five permanent members of the UN Security Council are the United States, United Kingdom, France, Russia and China. Each has veto rights over any decision made by the Council.

"The UK and US are very similar in their voting record. There are key differences in how they get there, but they both typically arrive at similar worldviews. They have a tendency to uphold democratic rights or human rights, in preference to states' rights where there is a conflict between the two," Dr Paige said.

"France is the most unpredictable, but has the strongest history of supporting Security Council action.

"In Russia and China they both have a preference of upholding states' rights. They see the collective state as a higher preference in social order. They are in favour of the right of states to not have their internal affairs meddled with by outsiders.

"But while Russia typically vetos proposed action it doesn't agree with, China will usually abstain and is much more conciliatory. So there are those important cultural differences between the members it's critical to understand."

Dr Paige said it was easy to see these preferences play out in the recent situation in Syria.

"Russia and China have kept vetoing security council action. They're consistently opposed to details of plans put forward by the US and UK for intervention, because they believe these plans are more focussed on regime change, bringing in a government palatable to US and UK interests, rather than focussed on peace," she said.

"They also see this as a violation of the Syrian people's right to self-determination. They will look at a peace plan if it’s determined by the people it protects. They argue that outsiders don't have a right to determine Syria's government.

"But neither side can agree, so we see these increasing issues in the region, and individual action that is actually making the situation worse. As a result there has been Russian military involvement in Syria in an alliance with government against fractured rebel groups.

"There will be no real changes in government, the Syrian government will just crush its opponents under its boot heel because the Security Council never came to agreement. What we're seeing now is eight years of civil war and a country wholesale destroyed."

Despite the spectre of Syria, Dr Paige said she did see the veto system working effectively.

"The veto serves a very important function, it's easy to say the Security Council should do something, but it shouldn't do that if there's no agreement. It can’t become a proxy war machine for any one government," she said. 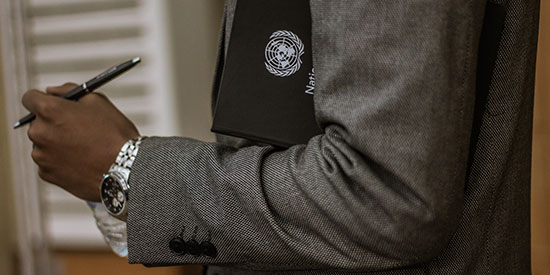