For those people finding it hard to stick to their pledge of a dry July, or wanting to reduce their alcohol consumption beyond the traditional month-long booze-ban, a team of Deakin University researchers may have the answer.

Researchers from Deakin's School of Psychology have recently transformed a proven face-to-face therapy into an app designed to help people cut their alcohol consumption.

Project leader Associate Professor Petra Staiger said there were a number of features that made the Deakin Alcohol App intervention different from other available apps.

"This is the first app available in Australia to offer psychological training that acts directly on automatic decision-making to change problematic drinking behaviour," Professor Staiger said.

"It's carefully designed to translate a highly effective method that works in face-to-face settings into an innovative and user-friendly app."

The eight-week Deakin-developed program works like a 'pocket therapist' to change habits and help the estimated one-third of Australian adults categorised as risky drinkers cut down their alcohol consumption.

"It affects automatic thinking and helps users practice a method of replacing problematic habits with healthier ones," she said.

"The method acts like a short-circuit, interrupting automatic habits, and making it easier to actually follow through with your goals.

"It's been shown to be effective for changing many problematic behaviours, such as helping people to quit smoking, reducing unhealthy eating, increasing exercise, and cutting back drinking.

"One advantage of the app-based delivery is that for this training to work well, you need to begin with some regular practice, and most people find it challenging to practice changing habits between visits to a health professional. The app helps participants practice the method for about one minute per day."

Associate Professor Staiger said the app had been developed for people who drink above recommended guidelines.

"This includes about a quarter of Australians who drink above single occasion guidelines at least monthly, and the 17 per cent of Australians whose average drinking levels place them at risk of an alcohol-related disease or injury.

"There's a huge amount of associated harm when it comes to risky drinking like this. A third of motor vehicle injuries have alcohol in the mix, plus you have increased risk of violence, injury, alcohol-related disease, reduced workplace productivity, damaged relationships, the list goes on.

"In fact, alcohol causes more than twice as many deaths than all other illicit drugs combined."

"That might be because they feel concerned about being judged by others, don't think they need help, or don't have the time or want to spend money on a therapist or program," Dr Liknaitzky said.

"The issue with drinking, as compared to other potentially problematic behaviours like gambling or taking illicit drugs, is that it is far more socially condoned and common. So there are far more opportunities to drink and associations to alcohol, along with social pressure for some people too.

"One of the benefits of an app like this is that it can overcome many of the barriers that prevent risky drinkers from seeking help, providing a flexible, affordable and confidential option.

"If an app can actually provide an effective method to reduce drinking - and we think this one will - then we have an opportunity to help many more people than we currently do."

The Deakin Alcohol App trial is open to Australian adults who would like to cut back their drinking and who can achieve at least one alcohol-free day each week. 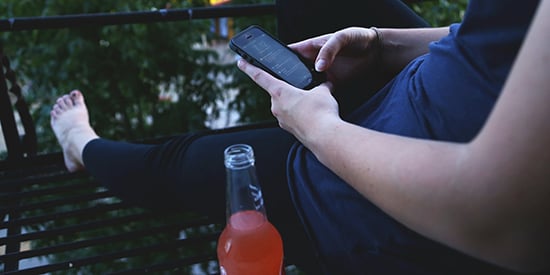