A 3D version of the Ford Falcon Ute is being developed by Deakin researchers as part of a wider project exploring the social value of Geelong's industrial design heritage.

The 3D images of a 2009 Ford Falcon XR6 will be used to create a Virtual Reality (VR) pop-up museum experience during Geelong Design Week 2020.

The museum experience will also include imagery of an original 1934 Ford Ute and allow viewers to see the progression of the design over time.

Dr Kaja Antlej, from Deakin University’s CADET VR Lab in the School of Engineering, said the project was an acknowledgement Geelong's tradition as a city of innovation and creativity.

"Since its earliest days as Australia’s wool capital, Geelong has been a significant industrial city and car manufacturing one of our most visible industries," Dr Antlej said.

"But we didn't just make cars, we invented a quintessentially Australian vehicle that helped shape our collective identity.

"By drawing on transdisciplinary skills from the School of Engineering, School of Communication and Creative Arts and the School of Humanities and Social Sciences we will examine our history as a city of invention and explore the idea of a post-industrial future."

Geelong Design Week 2020, from 19 to 29 of March, will celebrate Geelong as a UNESCO – City of Design by looking at the impact of design and the way it improves our lives.

The genesis of the Ford Ute came from a farmer's wife who, in 1934, asked the Geelong-based manufacturer for a vehicle "comfortable enough to take our family to church on Sunday" and suitable for her husband to "take the pigs to market on Monday".

Ford designer, Lewis Bandt, combined the style of a Ford Coupe with an integrated utility tray, creating a vehicle Henry Ford described as a "kangaroo chaser from Australia".

While the research team is still to finalise the 3D imaging session for the 1934 model Ute, this week's session with the 2009 model Ute is harnessing the skills of 3D specialist Max Rahrig, a researcher from the Centre of Heritage Conservation Studies and Technologies (KDWT) at Germany's University of Bamberg.

"Not only will this project result in the most accurate digital documentation and preservation of the heritage object itself but it gives us the chance to present and explore culture in an innovative and outstanding way," Mr Rahrig said.

"In doing so, it will improve our understanding of how VR heritage experiences can empower the local community and create stimulating learning environments and resources for museums, schools and individuals." 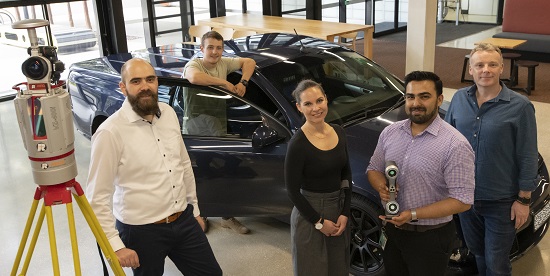 Scientists have captured imagery of a newly discovered underwater landscape beneath the waves in Bass Strait, revealing a complex seabed of deep reefs that have been sustaining life for fish and other fauna for millennia.