Marine scientists will soon have the clearest picture yet of  changes occurring in Victorian waters, thanks to deployment of new ocean monitoring equipment through Australia's Integrated Marine Observing System (IMOS) to be led by Deakin researchers.

Representing one of the largest investments in long-term observation of our state's oceans, the deployment is guided by the leadership of the Victorian and South Australian science nodes of the national IMOS.

Associate Professor Daniel Ierodiaconou from Deakin's School of Life and Environmental Sciences has been nominated Victorian node leader and said a lot was occurring in the marine environment that scientists were struggling to understand.

"Our climate, our way of life and the food we eat is driven by our ocean systems. Without long-term observations, particularly around the impacts of climate change, we are working in the dark," Associate Professor Ierodiaconou said.

Last week scientists from Deakin and Primary Industries and Regions SA's research division, the South Australian Research and Development Institute (SARDI), deployed an ocean mooring off the coast of Portland, in south-west Victoria, which will enable sustained monitoring of water quality and currents along the Bonney Coast - a region of high ecological and economic importance to South Australia and Victoria.

A strong seasonal upwelling in the shelf waters between Cape Jaffa and Cape Otway (the Bonney upwelling) supports one of the most productive marine regions in Australian coastal waters, including large populations of blue and southern right whales, Australian fur seals, sharks, and southern blue-fin tuna. It also includes important state and Commonwealth fisheries, along with a growing charter and recreational fishing industry.

Associate Professor Ierodiaconou said the Bonney mooring was deployed in 100 metres of water and carries a complex series of monitoring equipment through the water column to measure currents, pH levels, temperature, salinity and oxygen. The instrumentation will provide scientists with a better understanding of the upwelling system, its productivity and overall impacts of ocean acidification.

"With node leadership from Deakin, the University of Melbourne and Monash University, we are working closely across the academic, government and industry sector to answer Victoria's marine science questions using the new IMOS data streams," he said.

A series of new acoustic receivers have also been deployed on the seabed near the mooring in partnership with the Sydney Institute of Marine Science.

This acoustic curtain contributes to a national IMOS network that is monitoring movements of Australia's fish species and marine animals of national relevance such as the prized yellowtail kingfish.

Acoustic tags attached to or implanted into animals tracked by this national IMOS network of 'listening stations' provide scientists with information on how species are distributed in Australia's coastal waters and potentially impacted by fishing, climate change, and shifting ocean conditions.

A recent Fisheries Research Development Corporation (FRDC) study led by a panel of national experts in animal telemetry in association with IMOS found the location of the curtain in southwest Victoria was an important national priority for closing gaps on movement of key species of fisheries and management interest.

"As a national research infrastructure, we've always had activity in the region, but have felt that much more could be done," Mr Moltmann said.

"Continued funding for IMOS through the National Collaborative Research Infrastructure Strategy is enabling us to establish new work in Victorian waters, and to realise that untapped potential. We're particularly grateful to our colleagues at Deakin University for agreeing to lead this effort."

Continued support for Ships of Opportunity including a sensor package on the Spirit of Tasmania. The on-board system allows for daily measurements of oceanographic observations (including sea surface temperature) across Bass Strait. These observations have been made possible by a long term co-investment from Environment Protection Authority (EPA) Victoria.

Marine Microbes. Expansion of marine microbial monitoring in coastal waters including a Port Phillip Bay site that leverages existing water quality efforts by the EPA. While you can't see them with the naked eye Marine microbes play a critical role in our oceans' health.

Ocean Gliders. Continued support for ocean gliders that have been previously deployed across Bass Strait and in the Bonney upwelling. These units cruise the oceans providing vertical profile data from the surface to the seabed to help us understand coastal processes.

Autonomous Underwater Vehicles (AUV). Support for expanded AUV deployments at key reference sites in Victoria including our Marine Park network. These robots allow us to capture images of plants and animals on the seabed adding to our understanding of changes in patterns of biodiversity 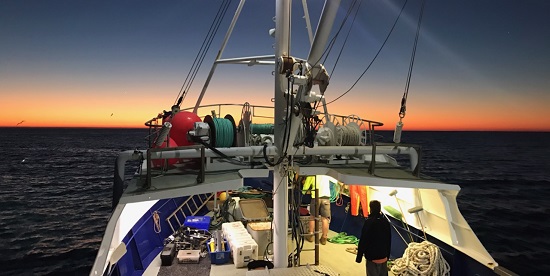