An ambitious plan for the future of the Geelong Railway Station is just one of the projects to feature in an exhibition by Deakin University's graduating architecture students being showcased in Melbourne and Geelong this month.

Jarrod Argent's re-envisaged station precinct defines the railway station as a gateway to Geelong, in the same way as Flinders Street Station plays a key role as an iconic meeting place in Melbourne.

The Masters Student said he wanted to solve the problem of the scheduling bottleneck caused by the single tunnel access between Geelong and South Geelong stations, make better use of the land around the station that is currently used for car parking and open up access to Geelong West via a new western concourse.

"This is an aspirational brief that envisages a future of reduced car usage, emissions and congestion and creates a station better embedded in Geelong's public consciousness as a space of both transport and broader use," Mr Argent said.

His project is just one of a series of projects on display in PaperSpace, Deakin's annual exhibition of work by architecture and landscape architecture students at undergraduate and master degree level.

The exhibition is currently at Federation Square and will open in Geelong next week. 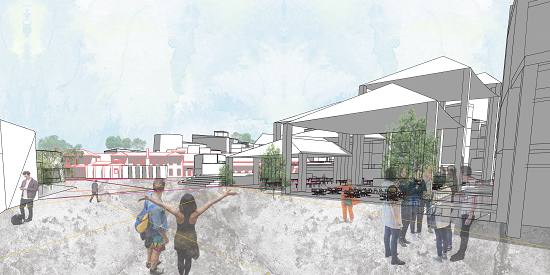