The world's most comprehensive study of the impacts of ocean acidification on coral reef fish behaviour has found that fish are not affected in the way previous studies suggest.

In what has been described as a 'game-changer' by lead researcher Associate Professor Timothy Clark from Deakin University's School of Life and Environmental Sciences, the findings, published in Nature, reveal that fish living in coral reefs cope better than previously thought with ocean acidification caused by increased levels of dissolved carbon dioxide (CO2).

"Contrary to previous studies, we have demonstrated that forecasted ocean CO2 levels for the end of this century have a negligible impact on the behaviour and sensory systems of coral reef fish," Associate Professor Clark said.

"Specifically, elevated CO2 does not meaningfully alter activity levels or behavioural lateralisation – that is left-right turning preference – nor does it alter the response of fish to the chemical cues released by predators.

"The negative effects of CO2 emissions are well established, with global warming already having devastating effects on coral reef ecosystems because of coral bleaching during heatwaves.

"CO2 emissions are also the cause of ocean acidification, which can be detrimental to calcifying organisms like oysters and corals at vulnerable life stages."

But Associate Professor Clark said the new study does not align with reported results from earlier studies of coral reef fish.

"The past decade has seen many high-profile studies that have found alarming effects of ocean acidification on coral reef fish behaviour," Associate Professor Clark said.

"Previous research has reported that fish become attracted to the smell of predators in acidified waters.

"But by measuring multiple behaviours in multiple species and making our data freely available, we have comprehensively and transparently shown that end-of-century ocean acidification has negligible direct impacts on the behaviour of fish in coral reefs."

In addition to the new data presented in the study, the authors also used data simulations and show that the phenomena reported in several previous studies are highly improbable.

"We expected previous results would be easy to replicate because of how clear and strong they appeared in those papers. Instead, we found consistently normal behaviours in fish that we acclimated to elevated CO2," Associate Professor Clark said.

"While our new work suggests ocean acidification may not cause population declines because of behavioural disturbances in coral reef fish, climate change is currently destroying the reef habitat through coral bleaching during heat waves.

"So, despite our new results, coral reefs and their fish communities remain in grave danger because of increasing atmospheric CO2.

"We are confident that our paper will have a pronounced impact on the entire field of ocean acidification biology." 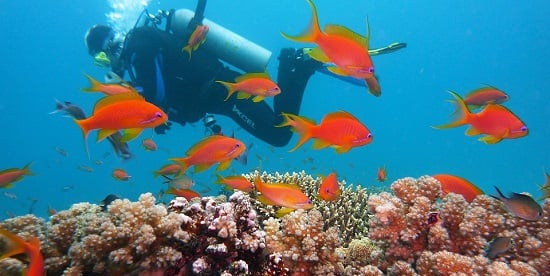