Hay fever sufferers should get tested for undiagnosed asthma in the lead up to this year's allergy season, the head of Deakin University's pollen counting and forecasting facility Deakin AIRwatch has warned.

Associate Professor Cenk Suphioglu said people with grass pollen allergies were most at risk of any future thunderstorm asthma event, like the deadly 2016 epidemic.

The Deakin AIRwatch team will work again this year with the University of Melbourne, Bureau of Meteorology, and the Department Health and Human and Services as part of the Victorian Thunderstorm Asthma Pollen Surveillance (VicTAPS) network, aimed at preventing a repeat of 2016's event.

During the official hayfever season, between 1 October and 31 December, Deakin AIRwatch will collect data from pollen traps at Deakin campuses in Geelong and Burwood and the research network will provide a coordinated monitoring, prediction and alert system to ensure Victorians have access to daily forecasts of allergen risk.

And to further protect themselves, those who knew they had a pollen allergy should seek a medical assessment for their risk of asthma.

"Anyone who is allergic to grass pollen - those who wheeze and sneeze - are at risk, you don’t have to have an existing asthma diagnosis to be at risk when it comes to a thunderstorm asthma event," Associate Professor Suphioglu said.

"People with pollen allergies are advised to speak to their health professionals to get a proper assessment and be put on an asthma action plan so they have their preventers and relievers at hand.

"On high-risk days they can also stay inside and close the doors and windows. It's just about exercising a few sensible precautions to avoid exposure."

Associate Professor Suphioglu said the greatest risk of a thunderstorm asthma event in Victoria was around mid-November.

"Although grass pollen is produced from about 1 September onwards, we start to see it in significant numbers in October, with a peak in November," he said.

"While initial forecasts for this season are less severe than 2016, people should not be complacent and every season should be seen as a potential risk for epidemic thunderstorm asthma.

"We are not seeing as much grass growth, but grass is very opportunistic and given the right conditions can grow very quickly.

"If the season is unusually long, and there's lots of pollen still in the air by the end of the year, there is scope for extending our work."

Associate Professor Suphioglu said the Deakin AIRwatch pollen traps used to determine risk levels worked by drawing in air from the surrounding environment in a way that mimicked the average human's respiration.

"It traps any pollen in the air on a sticky adhesive slide, which we remove each day at 9am," he said.

"We then count the pollen grains and calculate the proportion of grass pollen - the major culprit of thunderstorm asthma - compared with other pollen.

"This data - the number of recorded pollen particles per cubic metre of air - is uploaded to the Deakin AIRwatch website and used to categorise the day as a low, moderate, high or extreme risk for hay fever and asthma sufferers."

The data will be fed to the Bureau of Meteorology, along with new pollen counts in Hamilton, Creswick, Bendigo, Dookie and Churchill - introduced and funded by the state government following 2016's deadly thunderstorm asthma event - and an existing site at the University of Melbourne in Parkville.

"The Bureau will use this information to calculate an epidemic thunderstorm asthma risk forecast, which they can then use to issue warnings when required," Associate Professor Suphioglu said.

"This is an extremely sensible, effective and efficient system, as this phenomenon doesn't just rely on pollen but also on extreme weather events. So the Bureau will marry our data with theirs to produce a low, moderate or high thunderstorm asthma alert."

For the latest thunderstorm asthma forecasts go to: http://www.emergency.vic.gov.au/prepare/#thunderstorm-asthma-forecast 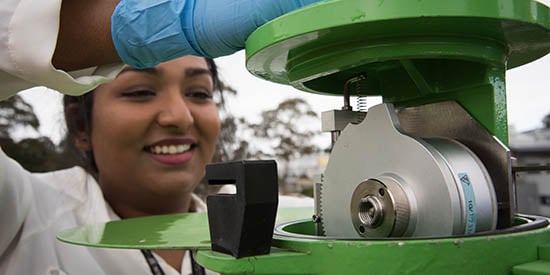