A new international study has discovered coral reef fish using shrimp as a type of 'farm labour', which researchers say is some of the first evidence of an animal other than humans domesticating another animal species.

The team led by researchers from Deakin University and Griffith University has found a species of coral reef fish, the Longfin Damselfish, have domesticated the planktonic mysid shrimp, using the shrimp to help fertilize their algae farms on the coral reefs of Belize.

Co-Research leader Dr Rohan Brooker from Deakin's Centre for Integrative Ecology in the School of Life and Environmental Sciences explained that while it has long been known that the damselfish farm small patches of algae for food, the role of the mysid shrimp was unknown until now.

"We found that the damselfish keep swarms of mysid shrimps within their farms, providing them with a long-term safe haven from predators," Dr Brooker said.

"The damselfish – which are highly territorial – aggressively defend their patch of reef against all but the mysid shrimps.

"The mysids, in return, swim over that farm all day and passively pump out waste material. All that extra waste acts as fertiliser, improving the farmed algae, and in turn, the condition of the farmer, the damselfish.

"The mysids get a nice safe place to live and the damselfish get a better quality farm. Basically, it's a naturally-occurring version of how humans keep farm animals."

Dr Brooker said the discovery was made through a series of field studies and behavioural experiments in 2018 and provides the first experimental evidence for a hypothesised pathway for how domestication evolved between humans and animals.

"The domestication of other species is a complex behaviour that has often been considered to be distinctly human," Dr Brooker said.

"Humans are best known for having really close, mutually beneficial relationships with all sorts of different animals, going all the way back to dogs about 10,000 years ago.

"While the domestication of fungi is seen in some insects, identifying examples of animal domestication by species other than humans has proven elusive. We mainly rely on archaeological evidence like cave paintings, animal bones and ancient DNA, and so establishing the initial steps of domestication is challenging.

"With the damselfish/mysid relationship, however, we were able to do experimental tests at the Smithsonian's Carrie Bow Cay Research Station on how these relationships could have initially evolved.

"The study suggests that the ability of mysids to occupy and thrive within the novel refuge created by the damselfish is similar to the theorized 'commensal pathway' where animals initially attracted to human settlements by food scraps or shelter were subsequently domesticated by our ancient humans.

"Ultimately, this means the mutualistic relationship between the damselfish and mysids could tell us something new about how we first domesticated familiar species like cats, dogs, pigs, and chickens."

Co-Research leader Dr William Feeney from Griffith University's Environmental Futures Research Institute said the study also highlights the important role that protection from predators can play in the development of domestication, with mysids quickly consumed if the farmer was not present.

"This study hints at the insights into domestication by humans that can be gained through examining relationships between non-human organisms," Dr Feeney said.

Dr Brooker, who first observed the phenomenon while swimming around the coral reefs of the Caribbean country of Belize (on the north-eastern coast of Central America) in 2015, is hopeful that future research may confirm the existence of the phenomenon in other coral reefs around the world.

"We have seen mysid shrimps living in the territories of territorial damselfish at Lizard Island on the Great Barrier Reef," Dr Brooker said.

"I've also heard anecdotal reports of mysid shrimp in the territories of other coral fishes around the world so there’s definitely potential that it’s a more common relationship than we know about."

The team's research paper, 'Domestication via niche construction in a fish-invertebrate mutualism', is published in Nature Communications. 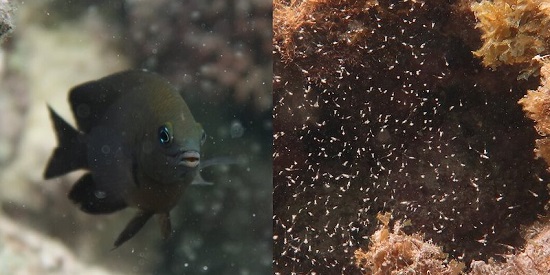