The team from Deakin's School of Engineering recently completed the project for aged care provider Maclean Care, with a $726,000 grant from the Federal Government's Dementia and Aged Care Services Fund.

Professor den Hollander said the project demonstrated perfectly how Deakin engineers were forging new ground in the burgeoning field of what's called 'mixed' or 'extended' reality, in order to benefit the lives of the community.

"Deakin is committed to supporting the communities we serve and I am delighted to see that this particular project, developed with the aim of helping inform older drivers in decisions relating to their license, is taking advantage of the very latest technology so that we can just do that," Professor den Hollander said.

"It is also a good example of just what is possible when you match research and development expertise with government support to provide solutions to industry and is not surprising that is already getting attention from around the world.

"The technology provides a more realistic experience than your typical simulator or VR headset, recognising that to immerse someone in a task there are many subtle things that need to be incorporated outside of just what can be seen.

"This is work that Deakin is continuing to advance through the development of extended reality systems for education, training and upskilling, which ultimately help make life safer for everyone living and working in the communities we serve."

"The opportunity to work with McLean Care, and CEO Sue Thompson's team, to fulfil their vision for Hector has been an exciting journey and a really great example of how university and industry collaborations can yield such great outcomes," Associate Professor Horan said.

"Access to this simulator will give older drivers an idea of how they're performing over time, so it's great for people who are keen to maintain their independence but also keep an eye on how they're tracking.

"It gives users a simulated driving experience and afterwards provides a read out of their reaction time and some important health metrics like heart rate.

"You're actually sitting in a car, in this case a Holden Captiva. We cut that in half and then integrated all the technology inside it. So you've got the feel of the seats, your seatbelt, pedals, indicators, and we even put feedback into steering wheel to give a real sensation of driving in different terrain.

"Then when you put the headset on you're driving around the local neighbourhood and you see local landmarks.

"Of course this doesn't replace the need for an older driver to see their regular GP for accurate testing, but it can be a fun, easy and accessible way to check in initially."

"They gave feedback on things like accessibility - the car was chosen specifically so the seat was at an easy height to get in and out. But we also had to make sure that this technology was something older people were comfortable with using, that it was something relatively familiar and wasn't too intimidating," he said.

"The feedback we've had so far has been fantastic, people are really excited to use this."

Associate Professor Horan said the research collaborators hoped that road authorities and licensing bodies might also be interested in the technology for learner driving and testing.

"For example, it could be an effective update of the current hazards testing used when teenagers sit for their learner's permit," Associate Professor Horan said.

"It could also be used to help learners experience dangerous situations that they might not necessarily come across in the course of normal practice." 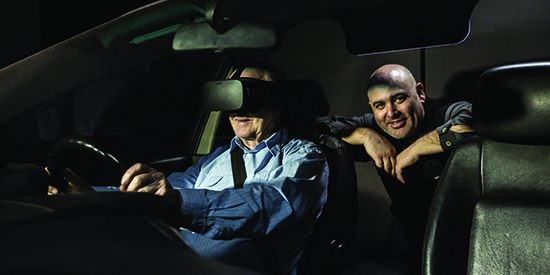 A new study into 2016's thunderstorm asthma epidemic that claimed the lives of ten people across Melbourne has identified a 'trifecta of risk' in people most vulnerable when severe allergic asthma events sweep across the city.