Deakin University has published the largest, most comprehensive study of the dingo's diet, finding Australia's top predator dines out on at least 229 different vertebrate species, including dozens of threatened animals, as well as pests.

The study, recently published in the journal Mammal Review, found dingoes ate 39 native land species that are classed as threatened or near threatened on the International Union for Conservation of Nature Red List, including the northern quoll, golden bandicoot and bridled nail-tail wallaby.

Lead author Dr Tim Doherty, a Research Fellow in Deakin's Centre for Integrative Ecology, said that although these threatened species coexisted with dingoes prior to European colonisation, they were more vulnerable now due to their smaller population sizes and the addition of new pressures, including predation by cats and foxes.

"This means predation by dingoes must be a key consideration when populations of threatened species are being established outside of predator-free reserves," Dr Doherty said.

"It's also important to consider the net effect of dingoes on species and ecosystems as dingoes also prey on a range of introduced pest species including deer, goats, rabbits, hares, black rats, house mice, foxes and cats.

"Dingoes can regulate populations of overabundant herbivores, including goats and kangaroos, thereby reducing grazing pressure and conserving habitat structure for native species. Interestingly, dingoes have also increased their consumption of deer in recent decades as this invasive herbivore has expanded its range."

Dr Doherty said dingoes could be described as a 'generalist predator', as their diet appeared to be heavily influenced by local prey availability.

"For instance, in arid central Australia, we found birds, reptiles, rabbits, small mammals and insects were major parts of dingo diets," he said.

"In contrast, these food groups were less important in temperate sub-tropical eastern Australia where medium-sized and large mammals, such as kangaroos, bandicoots and possums, were more important.

"The higher occurrence of medium-sized mammals in dingo diets in these areas may be due to the lower number of mammal extinctions in eastern Australia. Whereas Central Australia is a global extinction hotspot for mammals.

"Nonetheless, there was one medium-sized mammal that was a major food item for dingoes in arid areas - the European rabbit. In some areas, more than half of dingo scats or stomachs contained rabbit remains.

"So it's possible that native medium-sized mammals previously made up a major part of dingo diets in arid Australia, but they've since been replaced by rabbits."

Dr Doherty said that understanding this kind of regional variation could help predict how dingoes will adapt their diets as prey communities change in the future, due to things like climate change, larger populations of introduced species and habitat loss.

Dr Doherty and his co-authors compiled and analysed 73 datasets consisting of 32,000 dingo scats or stomach contents to quantify dingo diets as part of their study.

Based on the number of scats/stomachs that were found, large and medium-sized mammals were the most common components of dingo diets, followed by small mammals and rabbits.

"The sheer number and range of animals we found recorded in dingo diets was amazing. From insects and snakes, to kangaroos and camels, dingoes eat a huge range of different species," Dr Doherty said.

"We found that dingoes feed on at least 229 vertebrate species, including 62 small mammals, 79 medium and large mammals, 10 introduced hoofed mammals, 50 birds and 26 reptiles.

"However, the true number of species is likely to be much higher because dingo diets have been poorly studied in many parts of Australia, such as the Cape York Peninsula, and dingoes also eat insects, crustaceans, centipedes, fish and frogs, which are hard to identify to species in dietary samples." 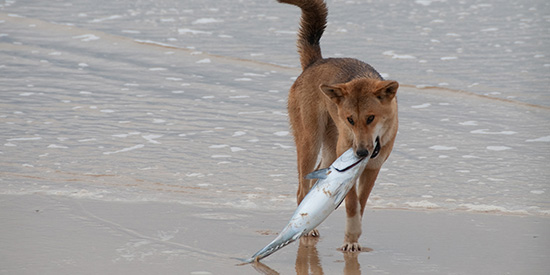