Future of emergency housing on show at Geelong Design Week

Visitors to Geelong Design Week this weekend will have the rare opportunity to take a guided tour of a new prototype one-bedroom unit – similar to a tiny house – designed to provide comfortable and sustainable emergency housing in areas hit by natural disasters.

Known as Prefab21: Phoenix Response House, the prototype has been developed by academics and students at Deakin University's School of Architecture and Built Environment in conjunction with Geelong company FormFlow.

The prototype utilises new prefabrication technologies developed by FormFlow and includes a living space, bedroom and bathroom in a space measuring just 4m by 10m.

Professor James Doerfler, Chair in Architecture in the School of Architecture and Built Environment at Deakin, explained that Prefab21: Phoenix Response House follows on from the original Prefab21 project completed in 2020.

"Each of the Prefab21 projects have been carefully designed and created with a particular client and need in mind," Professor Doerfler said.

"The original Prefab21 project saw the project team design and fabricate a prototype Independent Living Unit (ILU) for Samaritan House Geelong that could provide transitional housing for homeless men. A microvillage of seven ILUs is currently under construction in Moolap and the project itself is a finalist in the Premier’s Design Awards.

"This year, Prefab21 took on the challenge of designing of an emergency shelter for post-disaster relief. Over the course of the trimester, a team of academics, Architecture and Construction Management students, and industry partners explored the requirements of emergency shelters, particularly in the Australian context.

"The outcomes of the design process led to designing a transitional shelter which would allow people to live in the structure for longer periods of time than they would a tent or other impermanent shelter.

"This shelter is relatively lightweight, and can even be towed behind a ute to get to remote areas. There are many more design decisions that we made to make this shelter unique, including being able to fold it back up, move it and re-use it."

Deakin Vice-Chancellor Professor Iain Martin said the Prefab21 projects are an excellent example of universities and industry partners working together for the community.

"This project brought together FormFlow, a company that has graduated from our ManuFutures incubator facility, our students and academic staff to solve a really pressing problem. It is fantastic to see the talents of our students engaged in this kind of project.

"At Deakin we are building an ecosystem that allows the development of ideas into innovative, community-based solutions that support social, cultural and economic wellbeing. The Prefab21 projects demonstrate once more how collaborations between universities and industry can lead to practical and effective solutions that have wide application.

"What is most exciting about the Prefab21 projects is their enormous potential. We believe there is real opportunity to use the shelters not only for housing after bushfire and other natural disasters, but also for other long-term temporary housing situations." 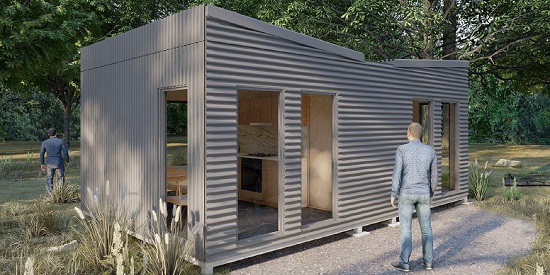