Social interaction, or lack of it, can determine how quickly a cancerous tumour grows, according to a world-first study tracking stomach cancer in fruit flies co-authored by a Deakin University scientist

Dr Beata Ujvari, a Senior Lecturer in Bioinformatics and Genetics in Deakin's School of Life and Environmental Sciences, believes the findings may be applicable to human cancers, and hopes the work can help encourage a holistic approach to cancer research and treatment.

Dr Ujvari, working alongside collaborators in France and Spain, used fruit flies to track how cancerous tumours grew if the insect was in isolation, compared with being kept in a group.

The results, published today in the Nature Communications journal, showed tumour progression advanced quickly when the fly was kept by itself.

Dr Ujvari said fruit flies were chosen for the experiment because they are social animals, like humans, and she believed the stress of isolation contributed to the faster tumour progression.

"When we put the sick fly in with a group of healthy flies, they socially isolated that fly to the point where it was experiencing similar levels of isolation to when it was being kept by itself, and we saw similar tumour progression to that scenario," she said.

"But when the sick fly was put in a group of other cancerous flies, it was included in the social group, and we found that the tumour growth slowed."

Dr Ujvari said she wasn't sure exactly why the healthy flies isolated others with a tumour, but the insects recognised that the cancerous fly behaved differently and was sick.

She said the research group's study in fruit flies built on similar findings in rats.

"There have also been some studies in humans looking at the effects of socialisation on tumour growth, but more research is needed," she said.

"Our next step will be to replicate our study in zebra fish, which are more closely related to humans."

Dr Ujvari said if more evidence was built, social supports could become a more important focus point of cancer treatment, on top of medical treatments like chemotherapy and radiation.

"This research highlights the value of a holistic approach to cancer research and treatment," she said.

"It shows the importance of not just focusing on medical treatments, but recognising that social services could improve patient outcomes too." 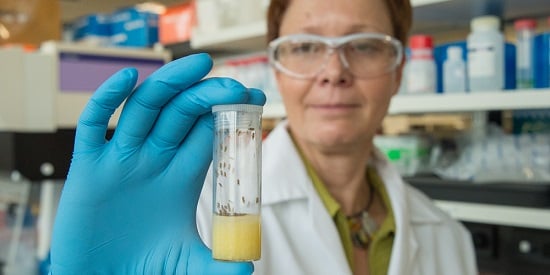