Scientists have discovered a novel method to implant healthy stem cells into the brain, allowing them to grow and repair damaged tissue, offering possible new treatments for people with brain injuries, Parkinson's disease and stroke patients.

The breakthrough led by researchers at Deakin University and the Australian National University (ANU), centres on a new hydrogel that mimics the structure and chemical makeup of the brain.

The hydrogel - a gel containing stem cells and held together largely by water - offers a sanctuary for cells and could replace existing and less effective treatments.

Co-lead author Dr Richard Williams, a Senior Lecturer in Medical Biotechnology at Deakin's School of Medicine, said cell transplantation - where new cells were implanted to help the body repair itself - was one of the most promising treatments for a raft of injuries and diseases.

"Cell Replacement Therapy is an attractive treatment option for neurological injury and disease, whereby replacement cells are implanted into the site of injury to regenerate and repair the neural network of the brain, providing immediate relief with longer term repair," Dr Williams said.

"However, the development of these kinds of treatments has been held back because the cells don't survive the process. They are also delicate, expensive and difficult to grow in sufficient quantities.

"If we could improve the number that survive and grow into new tissue, then we can move this technology forward into a practical therapy."

That's where Dr William's new hydrogel comes in. Working with colleagues Professor David Nisbet and Dr Yi Wang from ANU's College of Engineering and Computer Science, Dr Williams has built an artificial scaffold that tricks the cells into believing that they are in a normal, healthy environment.

Dr Williams said that by mimicking brain tissue, the hydrogel not only protects the cell during its journey through the syringe but also helps the cells thrive in the brain.

"What we have engineered is a novel soft hydrogel that matches the natural environment of the cell, but can flow with the cells protected within it to help them into the site of injury or disease," he said.

"Once there, our hydrogel acts as a natural incubator, allowing the new cells time and space to survive and turn into the types of adult cell that are missing.

"Through our work in mice models we have shown that these new cells not only survive, but go on to form new functioning neurons."

Professor Nisbet described the hydrogel as 'a sanctuary for cells' shielding them from inflammation in the injured brain.

"The cells then start to integrate with the brain's circuitry and we see repair and functional recovery," Professor Nisbet said.

"There is huge potential with the simple administration by swapping traditional saline for our hydrogel. These materials could be easily rolled out and used anywhere you need to implant cells - neuroscience, cancer and potentially even diabetes."

The team has now secured funding to develop these materials further, to add drugs and other biomolecules that will allow them to kick-start the regeneration of the brain.

"We hope to get these systems working towards a therapy in the next five years," Dr Williams said.

"Cell transplantation has shown the potential to repair the brain after injury, stroke, or from damage due to diseases such as Parkinson's, so further treatment development offers some very exciting opportunities."

The new technique has been tested with mouse brain cells and is described in a paper published today in the journal Advanced Function Materials. 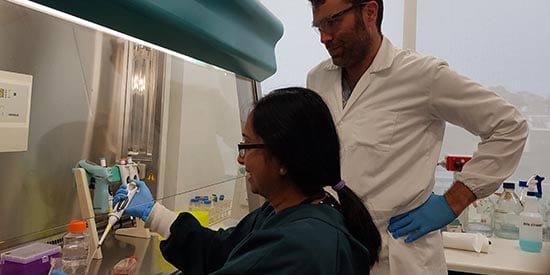 Nearly 50 medical students will arrive in Ballarat today, taking part in a program that hopes to encourage more graduate doctors to consider a career in the region.

A simple change in how public dental care is delivered could save millions in taxpayer funds and reduce waitlists that force disadvantaged Australians to wait years for treatment, according to new Deakin University research.