Deakin Business School has launched a new Centre for Integrated Reporting, with the aim of making the innovative integrated reporting model the "new normal" in Australia.

"It goes beyond traditional financial and sustainability reporting to give more insight into an organisation's strategy, resources and relationships, risks and opportunities, business model, governance and operations, leading to improved productivity, investor confidence and community engagement," he said.

"If Integrated Reporting had been more widespread previously, I believe the examples of corporate misbehaviour that came out of the Banking Royal Commission may have been avoided.

"Traditional financial reporting is picture of the past. Integrated Reporting takes that further to give a transparent picture of what organisations are working towards. That's critical information for investors, and in fact all stakeholders including customers, employees and regulators, and is also an important way to build trust in the community."

The Australian-first centre - a collaboration between the Deakin Business School, Association of Chartered Certified Accountants, Chartered Accountants Australia and New Zealand, and KPMG - will provide leadership in Integrated Reporting across three pillars: thought leadership and business practice, research, and professional education and training.

The founder of the Integrated Reporting movement, Professor Mervyn King SC, launched the Centre alongside Deakin University Chancellor John Stanhope AM at Deakin's Melbourne city campus last night. Professor King will act as a member of the Centre's Advisory Board.

Deakin's 2018 Annual Report to Parliament was its first to be developed using Integrated Reporting principles - the first university in Australia to do so. Deakin has also been running courses on Integrated Reporting since 2017, and will expand this education offering under the new centre.

"The adoption of Integrated Reporting has enabled us to provide greater transparency on how the University creates value for its stakeholders - meeting our social responsibilities as a public university, and helping to build the trust of the communities we serve," Mr Stanhope said.

"We pride ourselves on our innovative culture - one that is open to new ideas that have the potential to improve the efficiency of our processes, and that work to ensure our institution is approachable and collaborative. We believe these same benefits can be enjoyed by organisations across Australia.

"Since the first adoption of Integrated Reporting in South Africa in 2011, it has become best practice in the UK and Japan, and there has been a push for its widespread uptake in Australia. Drivers of integrated reporting adoption also exist in other countries of importance to Deakin such as India and Sri Lanka."

Australian organisations who already use the model include Cbus, VicSuper, Australia Post, Lendlease, CPA Australia, AGL, Transurban, Qantas and NAB. The adoption of Integrated Reporting is gathering pace and Mr Stanhope predicts it will soon become the norm, as its benefits become more widely recognised.

"Integrated reporting covers all stakeholders and better explains what a business is all about. It includes better information on which companies have good strategies for long-term value creation," Mr Stanhope said.

"Investors such as Cbus and VicSuper have spoken about the importance of integrated reports to their evaluations of the companies in which they invest. Research has shown integrated reporting can improve access to capital and capital allocation, and it also supports clarity in reporting, with a change from focussing on specific outputs to broader outcomes."

Mr Stanhope said the Centre would place Deakin as the primary recruiting ground for graduates with Integrated Reporting skills, which will be at the core of skillsets required in organisations in the years to come.

"Deakin believes this will be the new norm in Australia and the world, and that's why we're leading the charge. To do that we'll need to really invest in knowledge and skill development, both in the current and future workforce," he said. 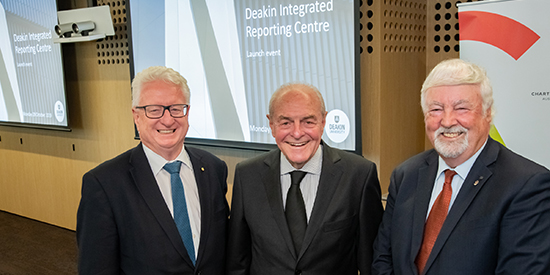