The inclusion of 'technologies of remembrance' in public war memorials places visitors as witnesses of conflict, allowing them to create their own perceptions of war and peace-time, according to a Deakin University cultural heritage and museum studies researcher.

Public war memorials are closely held as solemn places for personal and collective commemoration and remembrance. However, in what some might see as a contentious move, this role is evolving with sites like Melbourne’s Shrine of Remembrance becoming places that also ‘teach memory’ and encourage critical discussion about peace and war.

“With all sites of remembrance there is a tension and a need to strike a balance in the relationship between commemoration, education and tourism as well as helping people to learn about sacrifice, war and peace-keeping,” said Dr Steven Cooke, a researcher with Deakin University’s Faculty of Arts and Education and Alfred Deakin Institute for Citizenship and Globalisation.

“However, interaction between the digital and the architecture of the Shrine as ‘technologies of remembrance’ has resulted in a novel way to teach memory, allowing visitors to ‘witness’ and actively participate in the ongoing work of memory and creating spaces for critique.”

Dr Cooke has been working with University of Melbourne’s Professor Hannah Lewi to investigate how the introduction of digital formats are reframing collective remembrance, commemoration and storytelling in the recently redeveloped Shrine of Remembrance in Melbourne.

Between 2001 and 2014 the Shrine was redeveloped with new exhibition spaces – the Galleries of Remembrance – which include interactive digital interpretation, and screen-based displays, as well as mobile apps to explore the Shrine and wider commemorative landscape.

The researchers found that the redevelopment allowed visitors to use the architectural components of the building and the digital interpretation to critique the conflicts that had taken place.

“People tend to see architecture and the use of digital technologies as separate and focus on digital interpretations but not look how the architecture, the internal geography of the building and the digital additions relate,” Professor Lewi explained.

“You can see at the Shrine that the physical architecture of the monument, the new additions and the new digital content coalesce.

“They teach memory but they also create a more sensory and evocative experience and by doing so create ‘a witness’ through a personal engagement with the past.”

This shift to teaching and critique was consistent with moves by memorial museums around the world to look critically at their role in contemporary societies, Dr Cooke said.

“Not only are they there to commemorate those who had fallen in conflict but they are also asking should they act as international sites of conscience like the Slavery Museum in Liverpool and Hiroshima Museum in Japan?” he said.

“Much of our war narrative has focussed on nationalism, patriotism, the story of the returning soldier or the soldier who did not return.

“The Shrine and other memorial sites are a place where that perspective can and should be told, but as the lines blur between the physical and digital worlds the visitor is being asked to bear witness to what has happened. This allows a different engagement with these issues: rather than a space for the inculcation of supposed national values, we can see the Shrine as a space for debate and critique.” 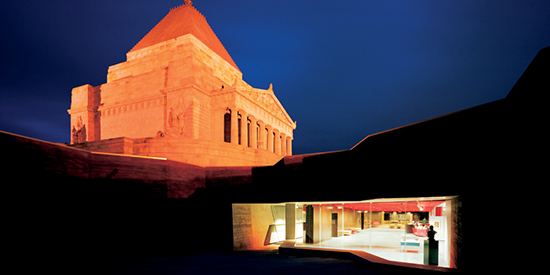 Australians born overseas are more reliant on social media for local and international news than those born in this country, a Deakin University study has found.