A social change pioneer on a mission to help isolated children access schooling was among the former Deakin students honoured at this year's Deakin Alumni Awards.

Megan Gilmour, who graduated from Deakin's Master of International and Community Development in 2013, was named an Alumna of the Year at Thursday's awards ceremony, which was held wholly-online for the first time in the awards' history.

Ms Gilmour is the co-founder and CEO of Robots4Good, an organisation using robots-as-a-service for new models of care in education, health, disability and aged-care settings.

She is also the co-founder and CEO of internationally recognised not-for-profit Missing School, for a program that enables isolated sick or injured children to connect with their teachers and friends through telepresence robots.

Deakin Vice-Chancellor Professor Iain Martin congratulated Ms Gilmour and the other award recipients on their achievements.

"Our alumni represent the richness and complexity of Deakin, and they are the best measure of our success," he said.

"The Deakin Alumni Awards give us the opportunity to celebrate the achievements of individual graduates, but also, the ever-increasing positive impact our university is making in the world.

"In a year that has challenged all of us, and tested our resilience and community spirit, it's wonderful to have such an event that brings us together in celebration of our highest achievers—where we can turn the spotlight on those who have studied with us, who have grasped the opportunities made available to them, and who have made a difference in the world."

Ms Gilmour was inspired to undertake her mission after living with her young son through his life-threatening illness and witnessing the impact of social isolation and disruption to schooling on his life.

"I'm truly honoured to receive this award," she said.

"In 2009 when I entered the heartbreak that was to become my nine-year-old son's two-year battle for life, I never imagined being at this point. When I walked out of Sydney Children's Hospital at the end of 2011, holding my son's hand alongside my daughter and husband, I promised myself I wouldn't turn my back on kids like him who need their schools.

"The crossroads of physical and emotional pain and social isolation is the battle of so many kids. Hope lies in proving to them that they are worth educating. Our robots have been approved for use in schools in all eight states and territories, getting sick kids back to class from hospital and home. I believe Australia can be best in the world at this, and I’m making that my job." 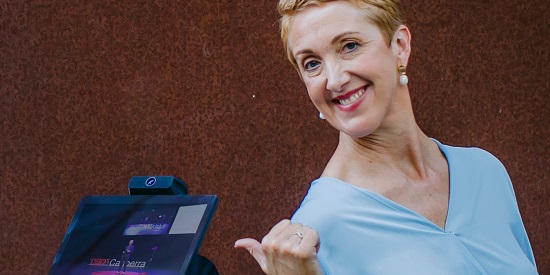