A gold-standard treatment for Australia's most common male cancer is leaving men with relatively low muscle mass, but that's potentially being missed by clinicians due to excess fat, another side-effect of the treatment, according to new Deakin University research.

The study from Deakin's Institute for Physical Activity and Nutrition shows men treated with hormone therapy for prostate cancer often have a dangerously high fat to muscle ratio leaving them at increased risk of cardiovascular disease, diabetes, osteoporosis, falls, and fractures.

The study's lead author Dr Patrick Owen said while the five-year survival rate for Australian men with prostate cancer was now 95 per cent, side-effects from the intense treatment regimen were becoming an increasing concern.

"Men diagnosed with prostate cancer are now living longer due to medical advancements, but are susceptible to a range of treatment side-effects," Dr Owen said.

"Prostate cancer survivors are now more likely to die from other conditions, such as cardiovascular disease, than prostate cancer, which may in part be due to our inability to detect and subsequently treat side-effects of therapy.

"It's critical we are able to quickly and easily identify modifiable risk factors for these other conditions. The amount of muscle we have relative to fat is one of the biggest indicators for diabetes risk, decreased physical function needed to complete daily tasks, and lots of other adverse health conditions."

It found men treated with hormone therapy for prostate cancer had the same amount of total muscle mass compared to other men in the study, but 4 to 6kg more fat mass.

"When muscle was considered in relation to this fat mass, men treated with hormone therapy for prostate cancer had lower fat-adjusted muscle mass, which may predispose them to further health issues," Dr Owen said.

Prostate cancer is the most commonly diagnosed male cancer worldwide, 18,000 Australian men are diagnosed each year.

"When men are diagnosed with advanced prostate cancer they are often treated with hormone therapy to reduce their testosterone levels, which discourages cancer growth. This is considered the gold-standard of treatment," Dr Owen said.

"It puts men through the equivalent of menopause. There's a loss of muscle and bone, they gain fat, and even start to have hot flushes.

"While men with prostate cancer treated with hormone therapy may have the same or greater absolute muscle mass than non-treated and healthy men, it's not as functional as the same amount of muscle in otherwise healthy weight men. The quality of the muscle, for example its ability to perform during activities of daily living, is reduced."

Dr Owen said he hoped his research would encourage more clinicians to test their patients for muscle mass relative to body fat.

"There is a certain scan that is often used to check bone density, which can also look at muscle and fat, but that’s not really being done at the moment," he said.

"When someone has a large amount of total muscle mass, but excess fat mass, it shouldn’t be assumed the muscle serves a similarly protective role as it may in those within a healthy weight range.

"We want to get the message out to clinicians that fat-adjusted muscle mass is something worthwhile to be looking for, and once identified it is critical patients are referred to appropriate allied health professionals, such as accredited exercise physiologists, to reduce their risk of additional health issues."

Dr Owen said there were lifestyle interventions that could be used to help men with prostate cancer reduce body fat and increase muscle.

He is part of a team, led by Associate Professor Steve Fraser within the Institute for Physical Activity and Nutrition, which recently completed a 12-month intervention looking at the benefits of an exercise training and nutritional supplementation program in men who have received hormone therapy for prostate cancer. Results from this trial are currently being prepared for publication.

"Given the current treatment and medical landscape, people are living longer with cancer, so there needs to be a shift in focus towards improving the quality of these additional years of living," Dr Owen said. 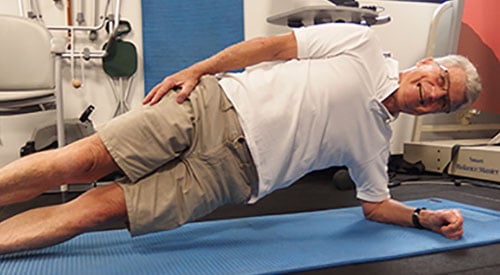