New research by Deakin University and the Murdoch Children's Research Institute (MCRI) has put a spotlight on how adolescent girls' relationships with their parents can later affect their bonding experience with their own children.

The researchers assessed the relationships between hundreds of 16-year-old girls and their parents, and then interviewed the same girls more than a decade later when they became mothers, finding teen-parent bonding problems were a strong predictor of later infant bonding issues.

The study, recently published in the journal Archives of Women’s Mental Health, found that for mothers of babies in the first of year of life, the strength and quality of the emotional bonds they felt with their infants was predicted by the level of parental care and control they received as teenagers.

"For mums of babies at two and 12 months, it was primarily having over-controlling mothers back when they were teenagers that predicted negative infant bonding experiences, whereas when it came to fathers during the teenage years, the later bonding problems arose primarily from lack of paternal care," she said.

Dr Macdonald said that while the research team investigated intergenerational risk, a positive message could be taken from the study.

"Parents who develop trust in their teenage daughters' decisions and who demonstrate affection and warmth are laying the foundations for those girls to later build strong emotional connections with their infants, if they themselves become mothers," she said.

"We really look at early parent-infant relationships as a conduit between generations; we think of them as an intergenerational bridge for mental health.

"Over-controlling parenting, in this case from mothers, can feel like the right thing to do for many parents, they want to protect their teenage children, but it can make it hard for these young women to then build the confidence and move forward to become caregivers themselves.

"On the other hand, neglect or a lack of warmth from fathers may influence the way young women build their future relationships.

"So it’s about looking for those problem patterns of behaviour and how we can help families identify alternative ways of interacting."

Co-author, MCRI researcher Elizabeth Spry said that we learn about relationships from our parents and those lessons can influence how we connect with our own children.

"For women who have had challenging family relationships, becoming a parent is an opportunity to think about what they would like to do differently with their own children," Ms Spry said.

"The good news is that we found many young women who had difficult relationships with their own parents were able to start on a new footing with their children."

Dr Macdonald said maternal-infant bonding issues - including infant directed rejection or anger and caregiving anxiety - could have negative effects on a child's development and were also associated with maternal postpartum depression.

"That's why identifying when there's a need for relationship repair, who needs that repair and how we can step in to help is critical," she said.

"When we're identifying people with postpartum depression, if we can understand their history, that can help us decide what steps need to be taken, or where the possible risks are.

"And ultimately, if we first work with parents of adolescents to strengthen family relationships, this could have a positive effect for generations to come." 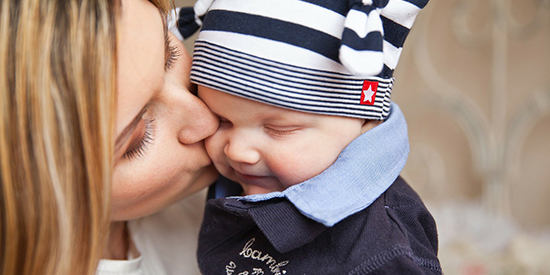 Australia's COVID-19 social distancing and isolation measures are triggering dramatic lifestyle changes for families and individuals across the country. A new nation-wide online study by Deakin University is being launched today to measure the emotional and mental health impacts of these measures on Australian families during the pandemic, and to apply any findings that can increase the resilience of Australians today and in the future.