The dark side of emoji challenges the courts: Deakin Law School research

Emoji, those seemingly harmless little icons used in text messages, have a dark side that is proving to be a minefield for law reform around the world, according to findings from Deakin Law School researchers.

In a paper to be published in the Tennessee Law Review, Dr Elizabeth Kirley and Associate Professor Marilyn McMahon examined if society is prepared to expand protections to the casual, unmediated emoji speech and if we should be more mindful of potential harms and liabilities that can arise when they are used in messages.

“However, we found the icons are challenging lawyers, judges and lawmakers around with world, with their use being recognised in a legal context not as a joke or ornament but as a legitimate form of literacy.

“With cases coming before the courts where the intended meaning of emoji in interpersonal messages is unclear, with some resulting in jail time for the offenders, it is clear that the legal status of these images needs to be determined.”

Through a review of selected cases from American and European jurisdictions, the researchers examined emoji in criminal, tort and contract law contexts.

They found emoji injected emotion, creativity and ambiguity – or ‘humanity’ – into computer mediated communications. But that ambiguity came at a cost when these messages constituted evidence in legal cases involving interpersonal communications.

“These communications can challenge current doctrinal and procedural requirements of our legal systems, particularly as they relate to establishing guilt or fault through matters such as intent, foreseeability and consensus,” Dr Kirley said.

“When, for example, do threats made with gun and bomb emoji by teenagers genuinely constitute harassment or even terrorism?”

The researchers identified four interpretative challenges posed by emoji for the judiciary or other conflict resolution specialists, characterising them as technical, contextual, graphic, and personal.

“Despite the best intentions of developers and the contributions of machine intelligence, many emoji remain difficult to interpret,” Dr McMahon said

“Technical issues can alter perception when an emoji is viewed on different platforms, for example, a heart shaped emoji sent from your phone may come up as a series of squares on Facebook.

“Context is also critical in translating a sender’s intentions. Ethnic, gender and other ‘diversity-related’ cues in the selection of emoji, their sequence in relation to other images, the number of repetitions of each image, and the nature of any accompanying text or acronyms colour the meaning of messages as perceived by others.

“Despite interpretation difficulties presented by emoji, their increasing inclusion in online messaging speaks to our social need to expand meaning and emotional expression in our online conversations.

“That objective in turn has created a need for a legal response to digital speech that can confuse, threaten, defame, and otherwise offend its target.”

The researchers conclude that a discrete legal space is needed in which accredited specialists in digital speech issues could assist judges to weigh evidentiary standards of probity and relevance in relation to emoji and their meaning.

“Within that framework a grammar or heuristic scheme would allow us to confidently interpret the meaning of these icons and to reliably understand when they negate or amplify intent and to decipher the human factor that emoji contribute to the law,” Dr Kirley said.

The study, ‘The Emoji Factor: Humanising the Emerging Law of Digital Speech’, will be published in the April 2018 issue of the Tennessee Law Review. 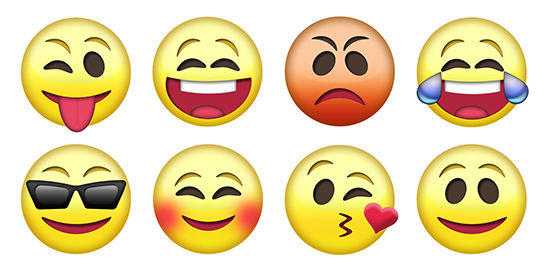