A packed audience greeted Craig Reucassel, from ABC TV’s popular War on Waste program, when he was the presenter at the annual Deakin Enviro Seminar in March.

'The Enviro Seminar is a wonderful opportunity to connect like-minded people and hear about different pathways for more sustainable use of our natural resources,' Associate Professor Miller says.

'It was amazing to see so many people come out on a Monday night to hear about waste and what we can do to address this growing problem.'

Mr Reucassel began the seminar by revealing he had his doubts when joining the War on Waste program. With a background in political science, law and economics, he felt it was a ‘sciencey’ area he was ill-equipped to front. But throughout the series, he realised that the scientists and engineers had already figured out solutions to our environmental issues. The issue, he told the seminar audience, is that we don’t necessarily use those solutions. And that, he determined, is because of politics, law and economics.

Originally known as a member of the satirical comedy group The Chaser, Mr Reucassel played a clip to remind people of the group’s sometimes controversial approach, conceding it may not have resulted in the changes they had hoped for. The War on Waste on the other hand, seems to have hit a nerve at the right time in history, and resonated deeply.

Mr Reucassel shared a clip from a War on Waste episode where he visited a supermarket fruit supplier that is forced to dispose of products that don’t meet cosmetic specifications, raising audible gasps from the audience.

A Rubik’s Cube analogy was used to explain the complexity of the issues involved in the war on waste. You can solve one side of the puzzle, but it may mean you create another problem on the other side. Not only can it be hard to convince people of the issue at hand, confusion can reign among those who do want to make a change.

'Craig brought this important issue of waste to life in an engaging and thought-provoking way,' Associate Professor Miller says.

'He was a wonderful speaker for this year’s Enviro Seminar.' 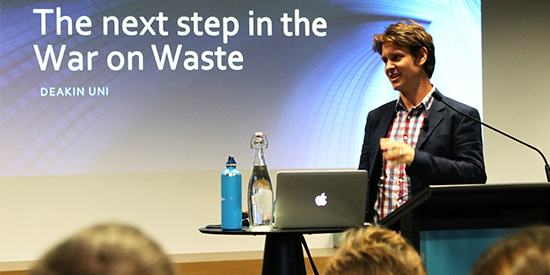 Training award to build ties between Deakin and Bangladesh

Associate Professor Abu Noman Faruq Ahmmed from the Department of Plant Pathology at Sher-e-Bangla Agricultural University in Bangladesh is the recipient of a highly regarded Crawford Fund Training Award and will be working within Deakin's School of Life and Environmental Sciences.