For Madison Wright, graduating in early 2020 with a double degree in civil engineering and commerce was the completion of an online study journey with Deakin University that began in 2013.

‘It was very rewarding to complete my degree,’ Madison says. ‘It feels like such a long time and to finally reach the end is very exciting.’

Madison was working in her family’s business as a heavy machinery operator when she decided on studying with Deakin.

‘At that time, I was the fourth generation in my family to operate excavators and earthmoving equipment. Due to ongoing drought in our local area, New South Wales’ Southern Riverina, resulting in reduced farm/irrigation work available, our family business began working on major mining and rail construction projects in Central Queensland,’ Madison explains.

‘I enjoyed working in construction but felt I could not continue to work FIFO (fly in fly out) and start a family. Exposure to these major construction projects sparked my interest in returning home to study engineering.

‘As a mature age student, I chose to study via distance education so that I could continue to live at home with my partner in Northern Victoria. Deakin’s online study option was very appealing, and the Geelong Waurn Ponds Campus was accessible when I was required to attend to complete practical assessments on campus.’

‘I really loved studying via the Cloud. It meant I could continue living my life and study at the same time. I never felt like my life was on hold until I finished university, I just kept going.

‘My partner and I were travelling parts of Australia while continuing to study. We were not bound to one place by our studies, which meant we were open to opportunities to work in new places without changing university.’

The variety of a double degree also appealed to Madison.

‘Engineering and commerce units can seem at opposite ends of the scale sometimes. However, working in the industry, I can see how well the two tie together for those who wish to excel in a project management role in construction.’

Madison is now the mother of two young children and has worked full-time or part-time throughout her studies. From the beginning of 2016, she has worked with Regional Roads Victoria DM Roads North Eastern Maintenance Alliance (NEMA) in Victoria, initially as a student engineer and currently as an Asset Analyst.

She says while juggling study with everyday life was challenging, it helped her learn about herself.

‘I discovered I am quite logical and calm when presented with stress,’ Madison says.

‘I like to develop a plan and work through tasks methodically to achieve the end result. Depending on how broad the initial task is, this may be revised three or four times until I get the right path mapped out. Prior to studying at Deakin, I don’t believe I ever had a particular reason to use this skill.’

‘Attending on-campus intensives was great. It was an opportunity to meet other students, which really helped when we had group assessments over the years. The practical sessions were enjoyable. It gave students an opportunity to get into the more hands-on side of engineering.’

Madison was also on campus at Deakin’s School of Engineering when she presented her final year project towards the end of her engineering studies in 2019. She had a special guest in tow for that visit – her then five-week-old baby.

Madison’s project was about cool pavement technology and aimed to identify treatments that may be of benefit in Victoria to assist in reducing the predicted increase in temperature expected in the coming years. Although she describes her final year project as a ‘mammoth task’, Madison believes one of the benefits for students is that it can really help ‘define your interests and passion as an engineer’.

‘Some weeks it was challenging to stay on top of my project timeline between study, work, having a toddler running about and a high-risk pregnancy,’ Madison says. ‘However, completing this project has been a critical stage in defining my career. Each critical moment since I first began working in construction has further defined where my interests lay.’

She says doing the project opened her up to a range of things she rarely had to do in the past.

‘I had to teach myself to use new software. I scoured the internet for new contacts who might point me in the right direction for some of the data I was seeking. I made new connections within the field. Mostly, I feel like I have something I am passionate about. I have an interest that could make a difference in the world if I continue to pursue it.’

Madison has recently enrolled in a new course at Deakin to continue her postgraduate education and diversify her skillset yet again.

‘I decided to take the opportunity to complete the Graduate Certificate in Data Analytics. It directly supports development in my current role at NEMA as an Asset Analyst and the future of Asset Management in the construction industry.’

As for people taking on a similar life/study situation, Madison has the following advice:

Find out more about studying engineering at Deakin. 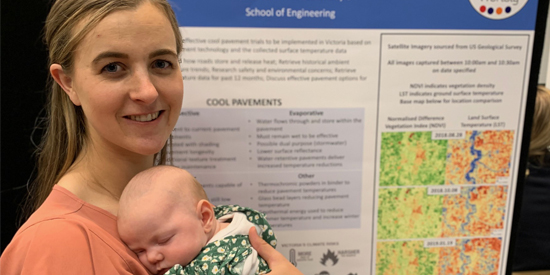