Engineering the way to a rewarding career

Ask Deakin University engineering graduate Danielle Johnstone what she learnt about herself while she was studying, and her answer is simple but powerful.

'I have discovered that I have the dedication to complete anything that I put my mind to, even if it becomes difficult at times,' Danielle explains.

Graduating with a Bachelor of Electrical and Electronics Engineering (Honours) in 2020, Danielle is now a Graduate Engineer with diversified Australian energy infrastructure business AusNet Services.

In her role, Danielle says she works alongside more experienced engineers as well as other colleagues, learning from them and their experiences.

'As a graduate, I get to rotate around the business to different teams which provides me with a broad understanding of the company and power industry,' Danielle says.

'This also provides me with an advantageous start to my career and many connections across the company that will greatly benefit me in my future role. I enjoy learning so much about the industry from the many different people I get to interact with on my rotations.'

While she was at Deakin, Danielle was the recipient of an AusNet Services Women in Power Scholarship, which she describes as a 'great privilege'. As well as financial support, she says the scholarship gave her opportunity to start networking early in her career through events and work placement, leading her to being employed at AusNet Services straight after university.

So, what drew Danielle to becoming an engineer?

'I chose to study engineering as I enjoyed maths and physics in high school, and I liked problem solving tasks which is a main factor of being an engineer,' she says.

'I knew studying engineering would be a great choice as there are so many possible career paths that can come out of it.'

During her time at Deakin, Danielle experienced being both an online and on-campus student.

'I originally chose to study at Deakin as I could study online, which I did do for my first year,' Danielle says.

'After I moved to Geelong to study on campus, the modern engineering building and friendly teaching staff proved to be great bonuses to studying at Deakin. I also got to enjoy being part of the Deakin community by getting involved in Deakin’s clubs and societies.

'I most enjoyed the hands-on learning during labs where I could relate what we learnt in class to a physical lab scenario, which further developed my knowledge. I also really enjoyed our math classes as maths is a passion of mine.'

As well as the rewards, Danielle says there were also challenges.

'The most challenging aspect was working through my procrastination, but this was something I learnt to work with by organising my study time and staying focused on the end goal of graduating and starting a rewarding engineering career.'

Now, with her graduation completed and her role with AusNet Services, Danielle has successfully achieved that goal. Dedication has its rewards. 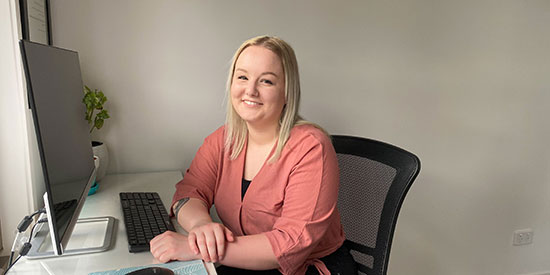 Conference puts spotlight on connection between engineering and design

Themes of technology, engineering and the creative arts will intersect at DesTech 2016, The International Conference on Design and Technology, from 5 - 8 December at Deakin University's Geelong Waurn Ponds Campus.

Expo celebrates the now and then of engineering at Deakin

Deakin University undergraduate engineering students presented their final year projects to an audience of industry partners, engineering advisory board members, alumni, staff, fellow students and other guests at the 2016 Engineering Expo at the Geelong Waurn Ponds Campus in October.