The invitation to the recent #VacantGeelong Open Studio Open Day was ‘come one, come all’ to participate in artists talks, collaborative workshops, walks, and conversations about Geelong’s future.

The #VacantGeelong project began at Deakin University in 2015. Through the project, a team of artists, Deakin researchers and students, and community groups are working on a vision for Geelong that celebrates and builds on its industrial history, its culture and its potential as a creative and clever city.

Artists and researchers have confronted the vacant spaces of Geelong’s industrial past and revealed stories, and practices rooted in place.

The artists involved in the project are Bindi Cole Chocka, Sarah Duyshart, Alex Hamilton, Merinda Kelly, Robert Mihajlovski and Amanda Shone. Through revealing the artists’ works-in-process – videos, drawings, sounds, objects, prints and installations – the Open Studio gave visitors an opportunity to reflect on cultural and labour practices, and practically, to participate in the project.

Dr Diego Fullaondo from Deakin’s School of Architecture and Built Environment is a member of the project team.

‘The day could not have been any more perfect,’ Dr Fullaondo said.

‘It was an affirmation of  the potential of the project and the dedication and commitment of the Deakin team of researchers, but it also showed it is contagious  and draws more and more people into its sphere.’

Special participants on the day were former Ford workers from the Macedonian community. They spoke about their experiences of working at Ford to SBS World News.

‘It was impressive to see the SBS team listening to the artists discussing their work with the former Ford workers from the Macedonian community who so warmly received our team a couple of months ago when we interviewed them,’ Dr Fullaondo noted.

‘This celebration has taken the project to another level, as the artists’ explorations, deeply touched by direct engagement with the community, are now evoking intriguing and unexpected understandings of the relevance of Geelong’s significant industrial fabric.’

The Open Studio Open Day was held on 24 May 2017 at the #VacantGeelong studio in North Geelong. It was an initiative of the #VacantGeelong team of Dr Mirjana Lozanovska, Dr Diego Fullaondo and Dr David Beynon from Deakin’s School of Architecture and Built Environment and Dr Cameron Bishop from Deakin’s School of Communication and Creative Arts (SCCA), along with the invaluable contribution of SCCA’s Dr Anne Wilson.

A major #VacantGeelong exhibition and symposium is scheduled for later this year at Geelong’s National Wool Museum. The #VacantGeelong project acknowledges the support of Creative Victoria and the City of Greater Geelong. 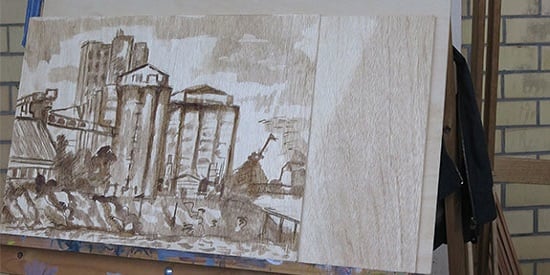 Training award to build ties between Deakin and Bangladesh

Associate Professor Abu Noman Faruq Ahmmed from the Department of Plant Pathology at Sher-e-Bangla Agricultural University in Bangladesh is the recipient of a highly regarded Crawford Fund Training Award and will be working within Deakin's School of Life and Environmental Sciences.

Professor Tuba Kocaturk discussed designing the smart cities of the future and the role of technology in two new videos on Australia's Science Channel.