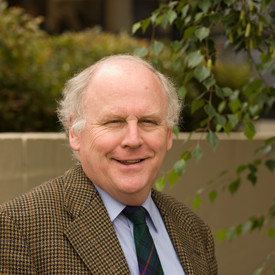 1969 (The Gordon Institute of Technology)

Former Deputy Dean of the Faculty of Business and Law and one of its longest serving academic staff members, Christopher enjoyed a 44-year career with Deakin and its antecedent The Gordon Institute.

He was presented the Deakin Alumni of the Year Award in 2012 for outstanding service and contribution to Deakin University and his profession.

Graduating from The Gordon Institute of Technology, Christopher commenced his academic career as a lecturer in the Department of Business Studies at Gordon in 1970.

In 1977 he became a senior lecturer at Deakin, bringing a strong sense of commitment to academic values and a pastoral, caring concern for students. He influenced the academic experiences and ultimately professional careers of thousands of Deakin students.

Over his distinguished career, Christopher received numerous academic awards, was widely published and held several leadership positions until his retirement in 2014.

Christopher also holds a Graduate Diploma Financial Management and a Master of Economics.

What do you love about Deakin?

What I have particularly enjoyed about Deakin was the opportunity I had to contribute to the professional careers of so many faculty students. Either as a classroom teacher or student mentor, the opportunity to positively contribute to academic success is a special feature of what it is I have loved about my own career at Deakin. There is justifiable pride in seeing a graduate achieve success in his or her professional life, knowing that in some small way you have contributed to that success. Additionally, I have enjoyed working with six faculty Deans and six Vice-Chancellors, each of whom brought positive values and changes to the faculty. Lastly, I loved the collegial and supportive academic and professional environment extended by all my faculty colleagues.

What's your best memory or funniest story from your time at Deakin?

My best memory is of having helped contribute to educate learners for the jobs and skills of the future. It made no difference whether it was in front of a blackboard, a whiteboard, teaching in on and off-campus modes from printed study guides and materials, or conducting face-to-face lectures and tutorials. No matter the delivery mode, I believe I have always been about providing my students a learning experience for the jobs and skills of their future careers. My best memory of Deakin is seeing myself in the words of John Henry, Cardinal Newman as 'a link in the chain, a bond of connection between persons'.

What has your Deakin experience best equipped you with?

Now that I have retired after 44 years in tertiary education, I look back fondly on my Deakin experience, believing it has best equipped me to contribute in a worthwhile manner to all of the opportunities that have been given to me throughout my academic career. Those opportunities and achievements allowed me to enjoy a very worthwhile, fortunate and satisfactory academic career.

Any advice for would-be Deakinites, staff or students?

All would-be Deakinites should pause and reflect on the pioneering work of colleagues from the 1980s who embraced technology in course design and program delivery, and contributed to Deakin becoming Australia's distance-education flagship. So much of what was written and developed in those early days continues to remain the foundation of the University's sophisticated, on-line delivery platforms of today. All would-be Deakinites cannot ignore the achievements in overall student satisfaction, flexible learning choices, teaching quality, innovative research outcomes and opportunities to study abroad, which all contribute to the profile of an institution that has achieved so much and has the capacity to achieve so much more into the future.