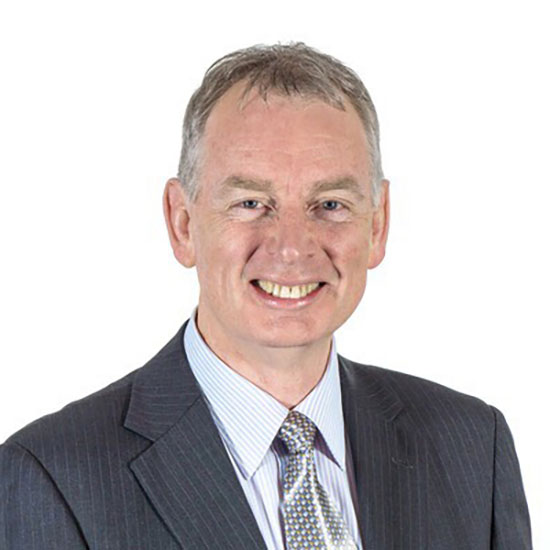 Dr Geoff Russell has had a colourful career in the media, working across Australia in all areas of the industry.

Can you tell us about your time at Deakin? Is there anything you especially remember?
After completing my TOP (Year 12 equivalent) at The Gordon Technical College in 1995, I was then in the first cohort of art and design students during the transition from Geelong's former Gordon Institute of Technology, to Deakin University: 1996 to 1998. I met my future wife Penny in that course; she was also an Art and Design student.

We were eventually relocated from the Gordon in Fenwick Street, down to 'The Mill' at the river end of Pakington Street. It was a glorious experience, and we learnt so much about art and life together. Our two key lecturers, Peter McNeill-Stitt and Rod Carmichael, were controversial and confronting, and certainly kept us challenged! We produced some amazing art and performances there, and eventually took that work to the Adelaide Festival in March 1998.

It was a life-changing experience being a student back then. The politics nationally were red-hot, and there was always something to protest about. It was an unwritten expectation that the social conscience of any university lay with its artists and creative students, and we were in the vanguard!

I did not complete my Diploma/Degree; there were some issues during the transition that caused about eight of us to 'drop out' of our third year studies in protest. However, I later returned to study and eventually completed several undergrad degrees – one being an off-campus Bachelor of Arts through Deakin, which I really enjoyed.

What has been your journey since finishing your course? Briefly outline your career path prior to your current role.
After completing teacher's college at Rusden, my first job was as a TV news cameraman/editor at STV-8 in Mildura. I then became a researcher/reporter with a current affairs program, State Affair, at ADS-7 Adelaide, before becoming a news reporter and producer for Seven National News at 25, the youngest in the network at the time. I shifted from Adelaide to then work in news at BTV-6 Ballarat, then at TEN NEWS Melbourne, then back to Ballarat - in various roles including news producer, chief of staff, deputy director of news, senior news reporter, reporter/reader. I then relocated to Bendigo to write and produce educational videos for the national schools' market, and established Media Australia with another former TV news colleague. Our production business lasted about 15 years, during which time I pursued my passion for history in a serious manner by publishing a book (Water for Gold which was launched by the then Victorian Water Minister, Tim Holding), and moved back to Melbourne to work for two years as a researcher/writer with the Victorian Parliamentary Committees. After that, I completed three years at the then Department of Sustainability and Environment (as a ministerial speechwriter, and senior media/communications adviser), then three years as Manager Emergency Management Communications with the Victorian Departments of Health and Human Services.

Most recently, I have returned to my 'home city' to work as Manager, Corporate Communications and Marketing Services for the City of Greater Geelong: my first foray into local 'grassroots' democracy!

What has been the biggest influence on your career?
One of my former Deakin Art and Design lecturers- Peter McNeill-Stitt- who, after my course, became a life-long friend and mentor to me and my young family. He is long dead now, but I think of him often with great fondness. Everyone needs a good mentor - beyond great parents!

Have you always wanted to pursue the kind of career you have embarked on? If so, when and how did you realise?
I have always loved writing, ever since my early teens. I have also loved to be creative in some medium, and express my thoughts, views and curiosity about the world.
So it's been logical that for the past 45 years since then, I've earned a living from moving words around on a page, and now on a screen!

What advice would you give graduates wanting to pursue a similar profession?
You have to remain optimistic and believe in yourself and the skills you learn. You also have to work hard at it, for it is competitive.

You also have to realise that regardless of how well you are prepared through your study, that nothing can quite prepare you for the real world of work. So you also must be prepared to continue learning through life. One degree will not get you through the next 40 or 50 years of any professional career - whatever that might look like now.

What do you believe Deakin University has shown you/given you as a person?
Beyond the career specific skills and knowledge needed for any profession, university study has given me life-long skills in communication, research and expression that I rely on every day: professionally and personally.These are the skills you need for any job that involves other people. Deakin in particular was also 'young and fresh' in its thinking, and I believe that even after 40 years it's still a very progressive and trend-setting education provider - teaching us to think, not just learn. There is a huge difference!

How would someone describe you?
Driven, ambitious, friendly, often fixated on the detail and perfection.

Is there any advice you would give to a person who is starting out in your career?
Continue to read, learn and study, and be aware that technology - especially in media - is constantly changing, and we need to change with it. If you don't, you'll soon become a dinosaur! I've seen too many fall by the wayside, claiming they are 'too old to learn new things'. That's just a cop-out.

Maintain your curiosity for everything, however trivial. It pays to know a little about everything, rather than a lot about only a few things. And learn as much as you can about people, they are the basis of everything you do.