The University Archives collects and maintains records of and relating to Deakin University and its predecessor institutions. These have been appraised as having permanent value as evidence of university business and activities or are determined to have a specific research or teaching value in an area of particular importance or relevance to the university. This includes:

The University Archives provides services which make those records accessible to the University community, to researchers and to the general public.

Records of antecedent institutions held by the Archives include those of: (if list too much info. use link to family tree instead).

Archives staff handle most enquiries via telephone and email. Records are made available to staff, students and outside researchers in the reference area by appointment.

When reproducing or referring to University Archives in a publication or paper an archives citation can be abbreviated or expanded and should identify:

Archives staff handle enquiries related to the University's records via telephone and email. Records can be made available onsite by appointment.

Archives staff provide an appraisal service to all university faculties, departments and centres to determine records of permanent value which can be transferred to the Archives.

Archives staff are also available to assist with course-based teaching and learning strategies, using our collections as subject matter for student engagement. We can tailor our involvement to suit, from one-off classes on archival research to ongoing supervision of archives-based projects.

Enquiries are also welcome from academic staff who would like guidance about the transfer of records they no longer require for their own use. 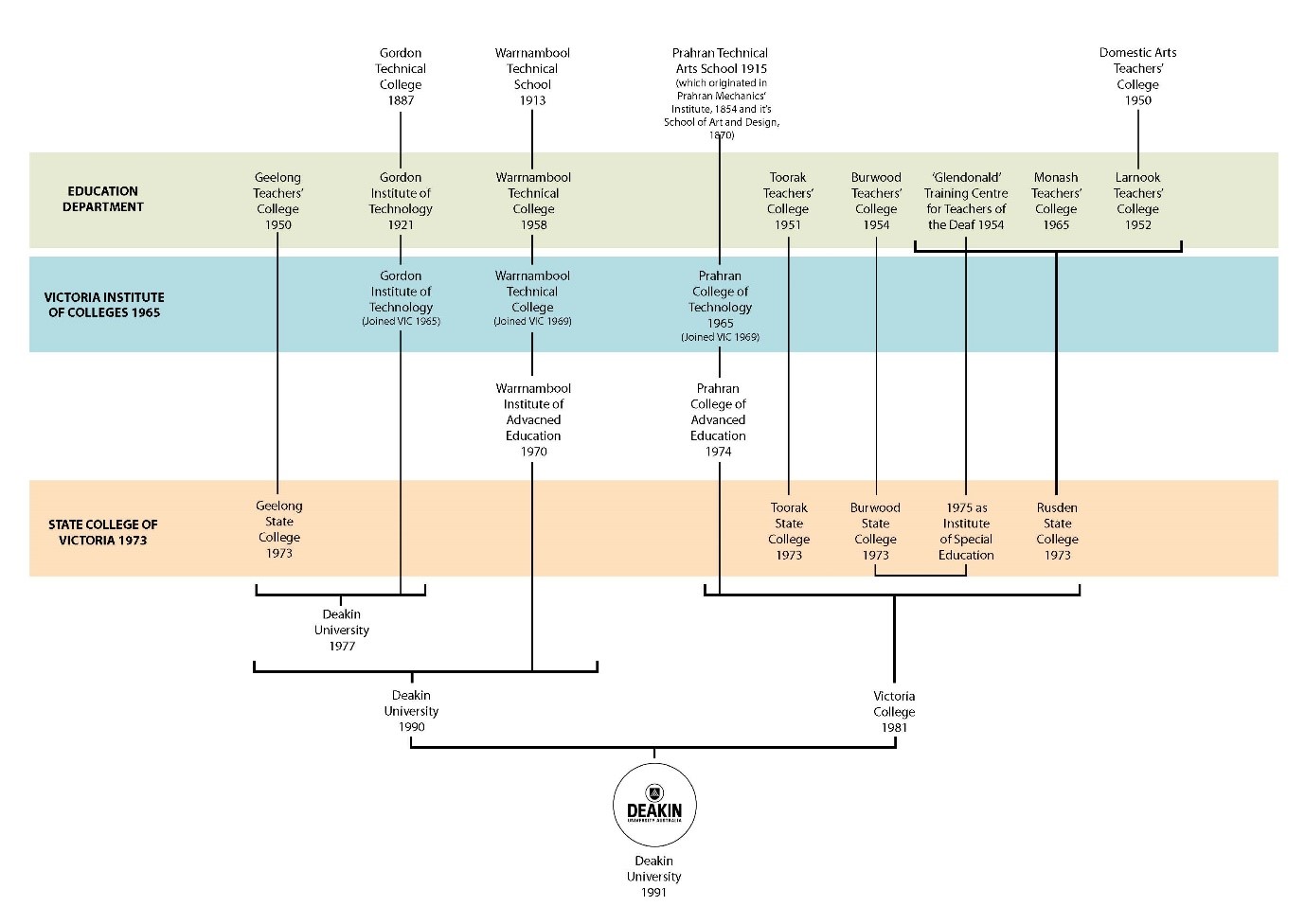 Toorak Teachers College was established in 1954 by the Victorian Education Department to train primary school teachers in response to a growing population of primary school aged children in Victoria. Initially operating as Glenbervie in Toorak it moved to the home of Stonnington in 1957 and became the Toorak Teachers’ College. It operated until 1972 when it became Burwood State College.

In 1973 Toorak Teachers’ College became the Toorak State College / State Colleges of Victoria (Toorak). It operated until 1981 when it became part of a group of State Colleges and the Prahran College of Advanced Education to merge to become Victoria College.

Burwood Teachers College was established in 1954 by the Victorian Education Department to train primary school teachers in response to a growing population of primary school aged children in Victoria. It operated until 1972 when it became Burwood State College.

Rusden State College was established in 1973 with the merging of the Monash Teachers' College, the Glendonald Training Center for Teachers of the Deaf and Larnook Teachers Colleges. In 1981 it formed part of Victoria College.

Geelong Teachers’ College was officially opened on 31 January 1950. It became the fourth teachers' college in Victoria. The College offered teacher education programs for primary teachers under the direct control of the Education Department. It operated until 1973 when it became the State College of Victoria at Geelong.

The Warrnambool Institute of Advanced Education began operation in 1970 offering degree and diploma courses together with a range of technical and further education offerings. It progressed to include various undergraduate and postgraduate programs in aquaculture, arts, business, nursing, municipal engineering, applied science and teaching. In 1990, as a result of the Dawkins higher education reforms, the Institute merged with Deakin University and became its Warrnambool campus.

The Prahran Technical School was registered with the Victorian Education Department in 1915 Specialising in art and artistic trades it had both junior and senior sections, a boys’ school and later a girls’ school. It operated until 19790 when it became the known as the Prahran College of Technology

Deakin University makes all reasonable efforts to assess copyright and contact copyright holders for permission where it is required.  If you believe your work has been reproduced without appropriate permission please review the instructions available here.