More reasons to protect the reef

The Great Barrier Reef’s enormous potential for climate change mitigation through its catchments’ capacity for carbon storage has been revealed in a world-first study led by Deakin University.

As part of a collaborative project with ten partners from academia and industry called Queensland Blue, researchers from Deakin’s Blue Carbon Lab have calculated the Great Barrier Reef catchments’ blue carbon capacity. This work has revealed that the seagrass meadows and mangrove forests within the catchments’ coastal ecosystems act as a natural carbon sink, storing 111 million tonnes of carbon, or ten per cent of Australia’s blue carbon stock. The ground-breaking mapping project has also revealed the region’s potential to deliver further carbon storage opportunities.

Blue carbon is the organic carbon captured by the world’s ocean and coastal ecosystems, including the carbon stored deep within the soils of coastal wetlands. Carbon can remain undisturbed for centuries, but coastal development, dredging and construction activities can release it back into the atmosphere as carbon dioxide or greenhouse gases, contributing to global warming.

Although Queensland’s blue carbon ecosystems have declined dramatically due to coastal development, and additional pressures such as rising sea levels also pose a threat, the project has revealed the value in retaining – and expanding – these coastal wetlands. The Queensland Blue project has shown that by restoring blue carbon ecosystems in 90,000 hectares of land throughout the Great Barrier Reef catchments, an additional five million tonnes of CO2 could be captured by 2100. This would reduce Australia’s greenhouse gas emissions and play a role in slowing the impact of climate change.

As the world’s largest coral reef, the Great Barrier Reef is one of the seven wonders of the natural world. Possessing breathtaking beauty, it is one of the world’s most sought-after tourist destinations as well as one of our most precious ecosystems that is deserved of protection. The Queensland Blue project has also demonstrated the huge value in protecting the reef’s catchment region – consisting of 19 local government areas and six Natural Resource Management regions – for both its precious carbon storage capability as well as its myriad of natural assets.

The Queensland Blue project is a multi-sector research and development collaboration – comprising academia, project developers and industry. This collaboration demonstrates the wide commitment in Queensland to protecting the Great Barrier Reef and its catchments and builds engagement and buy-in from key stakeholders – placing the research in a strong position to achieve significant impact.

In addition to contributing to knowledge that assists with the mitigation of climate change, the Queensland Blue mapping project will also lead to the improvement of water quality ecosystems, enhancing natural capital, contributing to jobs, economic growth and community wellbeing.

Tackling the defining issue of our time

Climate change is described by the United Nations as the defining issue of our time. With effects already seen across the globe, it will result in shifting weather patterns, threatened food production, rising sea levels and have unprecedented global impact.

Founded in 2016, the multi-award-winning Blue Carbon Lab is a unique, world-leading research group seeking to understand and respond to the impacts of global climate change on freshwater, coastal, and ocean ecosystems. With several successful projects also under way in Victoria and throughout the world (e.g., Pakistan, Seychelles), its work is helping to put Australia at the forefront of international efforts to incorporate coastal carbon within CO2 mitigation strategies.

Blue carbon ecosystems (seagrass meadows, tidal marshes and mangrove forests) are among the most efficient carbon sinks. However, these ecosystems are declining globally. Because of their ability to capture CO2, there is increasing recognition of the role of these ecosystems in climate change mitigation and adaptation, and consequently, there has been a growing demand to incorporate blue carbon into national greenhouse gas accounts.

The project was part of a pilot program from the Queensland Government’s $500 million Land Restoration Fund, which aims to expand carbon farming in the state by supporting land-sector carbon projects that deliver additional environmental, social, economic and First Nations co-benefits. Queensland Blue answers the most critical questions underpinning further consideration and investment in blue carbon in the Land Restoration Fund context: ‘How big is the opportunity for blue carbon in Queensland and where to act?’

The team’s inventory of the catchments’ blue carbon stocks included a modelling that evaluated the drivers of blue carbon stocks and how much carbon is potentially stored in the soils along mangroves and seagrasses in the region. They then created a spatial heatmap to inform a model to identify sites suitable for blue carbon additionality under different management scenarios – of enormous benefit for restoration and protection planning of ecosystems in the region.

Queensland Blue seeks to secure the State’s blue carbon future by expanding carbon farming through the development of a new blue carbon market. By calculating the blue carbon capacity of the Great Barrier Reef catchments, researchers have been able to identify how many tonnes of carbon dioxide (CO2) could be offset by blue carbon ecosystems and where opportunities for blue carbon storage might exist.

The research has the potential to contribute/inform the blue carbon method currently being developed by the Australian Clean Energy Regulator and to guide future restoration projects to be developed within the GBR catchments. For example, their results can help stakeholders to identify where to deploy restoration efforts aiming for carbon sequestration gains.

One important outcome of the research is the carbon credits that can be generated by the reinstatement of tidal exchange, which is one of the main restoration strategies for mangrove forests and tidal marshes being considered in Australia. The research shows that Fitzroy, Burdekin and Mackay Whitsunday Natural Resource Management regions have large areas of land behind tidal barriers and these areas offer the greatest blue carbon storage opportunities if tidal exchange was restored.

The team is also looking at how restoration projects at different spatial scales (e.g., all GBR catchments, regional, and local) can influence the outcomes of different management strategies. This information is crucial to guide future policy and investments in blue carbon in the region.

The research findings have been widely shared with Queensland and Australian stakeholders. The Blue Carbon Lab is currently preparing two publications that will share these findings internationally, to inform other national and international blue carbon protection strategies.

'Queensland’s blue carbon ecosystems have declined dramatically as a result of coastal development and face added pressures from climate change, including rising sea levels. Our models show that by restoring blue carbon ecosystems in 90,000 ha of land throughout the Great Barrier Reef catchments we could capture an additional five million tonnes of CO2 by 2100.' - Professor Peter Macreadie, Director, Blue Carbon Lab 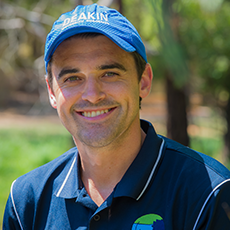 The blue carbon stock estimates only include mangroves and seagrass meadows so far. More carbon is held in the 207,000 ha of tidal marshes within the Great Barrier Reef catchments. The researchers hope to obtain more data from this ecosystem to accurately map its potential and to extend the modelling to the entire Queensland coastline.

The Land Restoration Fund is a $500 million investment by the Queensland Government to expand carbon farming opportunities through land-sector projects that deliver additional environmental, social and economic benefits.

The research continued thanks to additional funding from Qantas Future Planet and HSBC Australia.