Onstage at the national finals of FameLab in May, Andrew Katsis, a PhD student with Deakin University’s Centre for Integrative Ecology had only one prop – a replica of the tiny egg of the zebra finch – and three minutes to impress the audience with his research.

And impress he did, being declared the runner up of Fame Lab Australia 2017 for his presentation on how zebra finch parents communicate with their unhatched embryos.

FameLabis one of the biggest science communication competitions in the world, run annually in Australia and over 30 countries around the world. International finals are held in the UK, where the competition was first launched in 2005.

According to organisers The British Council, the competition aims to help early-career researchers build valuable skills in communicating their work to a non-scientific audience.

While contestants are encouraged to use props to convey their message, slide presentations and scientific jargon are not allowed.

Mr Katsis’ finals success was even sweeter, considering that his research kept him so busy he nearly didn’t submit his initial entry video on time.

“I was in the middle of my experiments when entries were due, so I ended up recording my submission in the bird aviary just as the sun went down on the last day,” he said.

Mr Katsis explained that his research focuses on pre-natal learning in zebra finches, a small Australian songbird found across most of the Australian mainland.

Previous work by his PhD supervisors Professor Kate Buchanan and Dr Mylene Mariette revealed that zebra finches use a specific call during incubation to warn their embryos about the heat they will face upon hatching.

Mr Katsis is investigating how hearing this incubation call affects the chick’s development once hatched.

“We know that the chicks alter their development after hearing the call while still in the egg, but we don’t yet understand what mechanism drives that change,” he said.

“My work is exploring the effects of prenatal sound on nestling begging behaviour and cognition. Understanding these adaptions can help us predict how birds might respond to climate change and rising temperatures, even if this particular behaviour isn’t necessarily climate change related.”

During his time studying birds, Mr Katsis has also developed a corresponding love of science communication. He writes a blog and is Life Science editor for online science magazine “Lateral”.

“FameLab gave me a platform to tell people about my research and how amazing zebra finches are. That was really appealing,” he said.

“Because the final was streamed live, it wasn’t just the 200 people in the room on the night that I got to share my research with; it was potentially many more.”

An early encounter with emu chicks on his parents’ farm kicked off Mr Katsis’ love of birds as a child – a passion that was cemented by David Attenborough’s “The Life of Birds” television series.

“The good thing about studying birds is that people love them. They look out the kitchen window and see fairy-wrens hopping around on the grass and they get so excited about it,” he said.

“As researchers, we’re able to tap into that enthusiasm.” 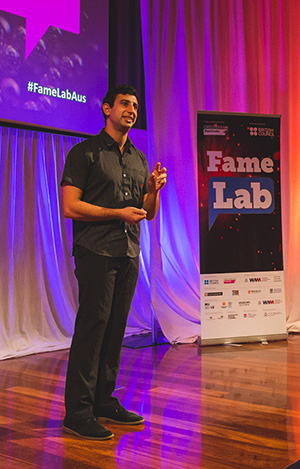 “FameLab gave me a platform to tell people about my research and how amazing zebra finches are. That was really appealing.”