Australia's first Anthropocene Campus will bring cutting-edge, cross-disciplinary thought to bear on ways for humanity to address the challenges facing the planet.

Coined in the 2000s, the term “the Anthropocene” refers to the geological period after the industrial revolution, where “the human species has emerged as a geological force now altering the planet’s biosphere”.

The term has become central to debates about contemporary environmental crises and the long-term future of the planet. The Anthropocene Campus, one of the first major “Anthropocenic” events, was first convened by the Haus der Kulturen der Welt and Max Planck Institute for the History of Science in Berlin between 2014 and 2016. Other campuses have been held in Lyon and Philadelphia, each providing space for cross-disciplinary debate and collaboration around the question of “the Anthropocene”.

Now, the first Anthropocene Campus in the southern hemisphere will be convened here in Melbourne. Anthropocene Campus Melbourne (ACM18) will include a keynote from acclaimed international scholar and polymath Professor Karen Barad, who will be visiting Deakin University for six weeks in August/September, supported by the Fulbright Commission.

Other high profile speakers for ACM18 include historian/social scientist Hannah Landecker, Director of the UCLA Institute for Society and Genetics, and ARC Laureate Fellow Margaret Jolly, from the ANU College of Asia and the Pacific.

A theoretical physicist and feminist, Karen Barad is Professor of Feminist Studies, Philosophy and History of Consciousness at the University of California, Santa Cruz. She is particularly known for her theory of agential realism, which frames the universe as comprised according to “the ontological inseparability of intra-acting agencies” ­– an influential philosophical concept, comparable to the work of scholars such as Bruno Latour, Donna Haraway and Andrew Pickering.

After beginning her career in physics (specialising in quantum field theory), Professor Barad moved into cross-disciplinary research in areas such as feminist theory, twentieth-century continental philosophy, epistemology, ontology, philosophy of physics and cultural studies of science. She is the author of “Meeting the Universe Halfway: Quantum Physics and the Entanglement of Matter and Meaning” and advises feminist academic journals “Catalyst: Feminism, Theory, Technoscience” and “Signs: Journal of Women in Culture and Society.”

The Anthropocene Campus Melbourne will be held 29 August–1 September 2018 and is being hosted by the Alfred Deakin Institute for Citizenship and Globalisation (ADI) and Deakin’s Science and Society Network. PhD candidates, Humanities, Arts and Social Science scholars at all levels, as well as artists, physical scientists, engineers, and other practitioners, are encouraged to apply. Applications close at midnight AEDT on Tuesday 3 April 2018.

ACM18 will explore the forms of critique, knowledge-making and collaboration that are needed to meet the challenges society now faces. A range of lectures, field trips, and workshops in Melbourne and the wider area will explore the theme of “The Elemental.”

Four streams – Earth, Water, Fire and Air/Flesh – will involve facilitators and participants from Deakin and elsewhere in the co-creation of an experimental curriculum. Writing and workshopping exercises will lead towards longer-term publication efforts.

The committee behind ACM18 is chaired by ADI anthropologist Dr Timothy Neale, who explained that the event is an exciting opportunity for Australian scholars to think about the challenges of the Anthropocene and “test out their thinking, connect to interdisciplinary projects and create new collaborations”.

“This initiative is allowing scholars from Deakin and elsewhere in Australia to build new partnerships and to connect with the cutting-edge cross-disciplinary thinking taking place in relation to the Anthropocene around the world. We are also excited that it will open the way for Deakin to be involved in future planned Anthropocene Campuses,” he said.

“Australia has little institutional infrastructure for science and technology studies, despite the increasing importance of the Asia-Pacific region in scientific innovation, as funding lags behind the US and Europe,” Ms Kowal said.

“With unique environmental challenges, a vibrant scientific research sector, and growing recognition of Indigenous knowledges, we have much to gain from the insights of the science and technology studies discipline, and much to contribute to the field internationally.”

The event will follow the Annual Meeting of the international Society for Social Studies of Science, held in Sydney in late August, and will coincide with an art exhibition at Testing Grounds, an experimental arts space in Southbank supported by Creative Victoria. The exhibit – “M/others and Future Humans” – is curated by Deakin’s Associate Professor Eben Kirksey, in collaboration with the Copenhagen-based Laboratory of Aesthetics and Ecology.

ACM18 is being hosted by Deakin University’s Alfred Deakin Institute for Citizenship and Globalisation and Deakin Science and Society Network, in partnership with the University of New South Wales Faculty of Arts and Social Sciences and Centro de Investigación para la Gestión del Riesgo de Desastres (CIGIDEN) and with support from the Haus der Kulturen der Welt and the Max Planck Institute for the History of Science. 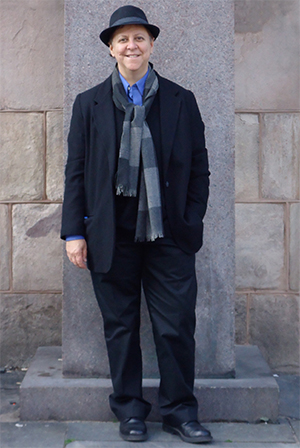 Professor Karen Barad, Professor of Feminist Studies, Philosophy and History of Consciousness at the University of California.

Professor McGillivray launched the United Nations Economic and Social Commission for Asia and the Pacific (ESCAP) 2015 survey in Australia this month. It is the organisation's flagship publication.