Researchers have used satellites and surveys from light aircraft to unveil the unique breeding behaviour of an Australian waterbird.

New Deakin University research shows a threatened species of Australian waterbird will fly thousands of kilometres to lay eggs equivalent to half their body weight in a bid to capitalise on suitable breeding conditions.

The six year study, completed by scientists at Deakin’s Centre for Integrative Ecology, within the School of Life and Environmental Sciences, reveals the unique breeding behaviour of banded stilts, a nomadic bird that nests at some of Australia’s iconic inland lakes.

The research was recently published in the US journal Conservation Biology.

“These birds have long been a source of intrigue because they don’t breed annually and never breed in the coastal wetlands where most people see them,” Mr Pedler said.

“Instead, they only breed when desert salt lakes fill after flooding rainfall, which might happen once every 10 or 20 years.

“But what our work has shown is that these birds are able to exploit smaller rainfall events and they are attempting to breed more often than we thought they were.”

Mr Pedler said his study tracked the birds as they flew from saline wetlands near the coast to inland salt lakes in Western Australia and South Australia.

“They fly hundreds or thousands of kilometres to these lakes within days of them being flooded, nesting in immense colonies, totalling thousands of breeding pairs,” he said.

“On large salt lakes such as Lake Eyre, rain wets the normally-dry salt crust and brine shrimp hatch from eggs that lie dormant in the dry soil, providing the perfect feast for the female birds who produce clutches of eggs equivalent to 50 to 80 per cent of their body weight.

“We don’t yet understand how they know when water is returning to these lakes – it could be low level vibrations from thunder or a change in barometric pressure – but what we do know is that they’re responding to it with these extreme nomadic flights and breeding.”

Unfortunately, the eggs and hatchlings often don’t make it very far.
“The majority of breeding events we observed ended in failure when the salt lake water dried too quickly in the desert heat or silver gulls ate the stilts’ eggs or chicks,” Mr Pedler said.

“When gulls are present at breeding times they can wipe out an entire colony of eggs and chicks.

“It’s not well understood whether such predation is natural or has increased with growing gull populations resulting from human waste management practices, both in the desert and near the coast.

“State government environment agencies have poisoned gulls to manage the predation, but because the banded stilt breeding occurs so infrequently and in remote places it’s a difficult problem to address.”

Even more worrying, Mr Pedler said, were plans to mine some of the inland lakes for potash.

“There is currently a proposal to mine the surface of many of the stilts’ breeding sites in north-west Western Australia, an area that this study suggests may be particularly important breeding habitat
for the species,” he said.

“This will drastically change the surface hydrology of these lakes, which we think will make them unsuitable as banded stilt breeding sites.

“These lakes are really important because they fill from intense rainfall more frequently, than southern desert sites and gull predation doesn’t appear to be as significant there.”

Mr Pedler said research to understand and protect the banded stilt was important as it gave critical insights into how animals might adapt to climate change.

“They are a model for other species in other unpredictable climates, and how they adapt to survive,” he said. 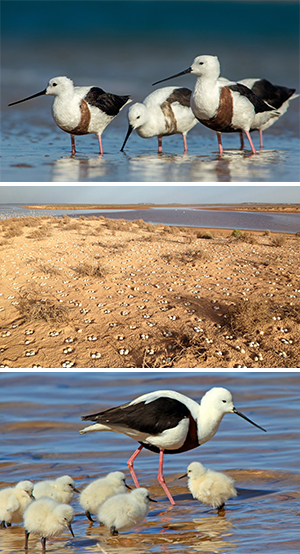 Banded Stilts have long been a source of intrigue because they don’t breed annually and never breed in the coastal wetlands where most people see them.