New Deakin University research, completed in partnership with Aristotle University of Thessaloniki in Greece, has found a greater trend towards increases in sea turtle population size globally, as well as some worrying population declines.

“Positive trends in abundance are likely linked to the effective protection of eggs and nesting females, as well as reduced harvesting and bycatch in fishing.”

Historically, adult females were harvested for food while nesting onshore, along with their eggs, as well as being harvested at sea or incidentally caught by fisheries (bycatch). This led to a rapid decline in sea turtle populations by the 1950s.

Eggs and hatchlings emerging on the beaches are also consumed by various predators, including crabs, foxes and racoons.

Dr Schofield said most conservation efforts focused on reducing illegal harvesting, and caging or relocating nests to hatcheries to maximise protection, with these actions being reinforced by the establishment of marine protected areas.

However, she said there was still a lot of work to be done.

“While the news in this study is encouraging, long-term support for conservation is hard to obtain but is essential to deliver sustained conservation success.

“Many populations remain under threat, especially as there may be lags of several decades in detecting survival rates based on nesting data, because of the time required for offspring to reach maturity,” Dr Schofield explained.

“The positive trends we found should not be interpreted as sea turtle populations being out of the woods; rather, we are highlighting the value of long-term sea turtle conservation efforts globally, and the need to continue these efforts into the future.”

Dr Schofield said that in Australia some positive trends were detected, but conservation concerns remained.

“Of note, conservation efforts continue to try and improve the nesting habitat for the green turtle nesting beaches at Raine Island [a coral cay on the outer edges of the Great Barrier Reef], which is the largest green turtle rookery in the world.

“Challenges remain to document abundance trends across the massive amount of the Australian coast used by nesting turtles.” 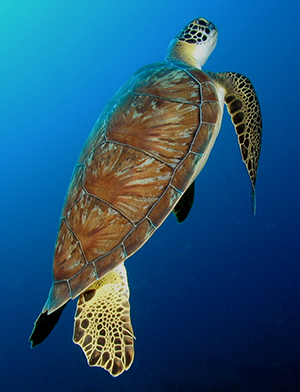