Anniversary of conflict reveals more work to be done

One year on, a new book sheds light on the ongoing Myanmar Rohingya conflict.

August 25 marked the first anniversary of the outbreak of violence that drove 671,500 Rohingya Muslims into Bangladesh in a matter of months. There are now 1.1 million Rohingya refugees living in Bangladesh.

Deakin University Senior Lecturer in International and Community Development, and Acting Director of the Australia Myanmar Institute, Dr Anthony Ware said there were still more questions than answers around what the future holds for Rohingya refugees, and that narratives about statelessness, denial of citizenship and state oppression of a vulnerable minority were just part of a multifaceted picture. .

“The Rohingya conflict is not only about the Rohingya, it is a complex and intractable situation that transcends the singular narratives we often come across,” he said.

Dr Ware and fellow Deakin researcher and Senior Lecturer in International Relations Dr Costas Laoutides, have drawn on their extensive work in the international relations and development fields and numerous trips to the region to co-author their new book, “Myanmar’s Rohingya Conflict”.

Described as, “an invaluable, must-read inquiry into the complexities and divergent perspectives of [a] seemingly intractable crisis,” the book explores the motivation and drive behind the conflict, as well as the peace building efforts to address it.

“We wanted to explore in depth and identify these complexities, make sense of them and point towards a number of recommendations for further action,” Dr Laoutides said.

“Engaging with this type of conflict requires a thorough knowledge of the context and actors involved. Black and white interpretations are not constructive for the resolution of this conflict.”

According to Dr Ware, the pair’s research revealed the Rohingya conflict demonstrates  larger power struggles  associated with the politicisation of ethnicity in Myanmar. He said these issues must be addressed for both the Rohingya and the democratic future of the country, adding that the research had also found positive local responses and efforts at peace-building.

“The recent push by some members of the UN Security Council, and others, to refer Myanmar to the International Criminal Court is putting the horse before the cart. Transitional justice may take many forms and should come after some sort of negotiated solution.

“There is no solution to this situation that does not require the cooperation of the Myanmar military and government.  There is a real danger that talk now of referrals to the International Criminal Court and so on will only become further obstacles to positive outcomes for the Rohingya themselves.

“As well as working for the urgent return of the Rohingya from Bangladesh, much more must be done to secure the situation for the 600,000 or so Rohingya who remain in Myanmar and to protect these people, strengthen social cohesion, and address the narratives and fears driving this conflict.”

Dr Ware and Dr Laoutides’ book will be launched today at a seminar hosted by Deakin’s Alfred Deakin Institute and the Australia Myanmar Institute. Click here for more information. 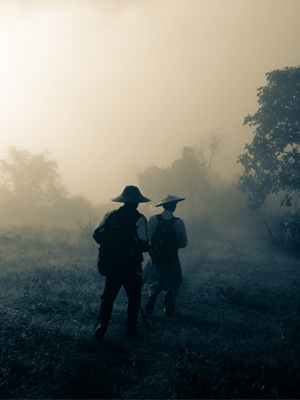