A research breakthrough at Deakin University is set to open the doors to a new era of disease diagnostics and treatment that could transform healthcare in developing countries and reduce the spread of diseases such as AIDS and Ebola around the world.

It might seem paradoxical, but the protein lubricin - which is found in the common synovial joints of all mammals – is both sticky and non-sticky.

Dr Wren Greene, an Associate Research Fellow within the Institute for Frontier Materials, has isolated the protein and discovered its unique properties that will lead to significant improvements in medical diagnosis.

He explained that lubricin is a “miracle” protein that provides a firm coating on virtually any surface, but, once in place, it is non-sticky – and it is virtually impossible for anything to attach to it.

“Lubricin is a ‘highly conserved’ protein that is almost identical in humans, dogs or elephants. In its natural state, its anti-adhesive properties prevent wear in joints,” said Dr Greene.

“It prevents debris, such as cells, proteins or calcium phosphate crystals, from sticking to our joints. Without this lubrication, the debris would have an effect like sand in the gears of a motor car.”

“Most importantly, we have shown that the anti-adhesive properties of lubricin out-perform the current ‘gold-standard’ of anti-adhesive technologies, polyethylene glycol.”

Dr Greene explained that the protein has outstanding potential in the cutting edge field of microfluidics – or lab-on-a-chip technology – which enables diagnosis at the nanoscale. His colleague, Professor Stephen Haswell, a world expert in sensors and microfluidics at Deakin’s Centre for Rural and Regional Futures, said that the breakthrough is what biomedical scientists have been waiting for.

“It provides us with a route to improved device performance, which will lead to the widespread adoption of microfluidics as a low cost diagnostic tool,” said Professor Haswell.

“It is the missing piece of the puzzle, and will lead to the effective development of lab-on-a-chip devices around the world.”

Professor Haswell added that lab-on-a-chip technology can analyse minute quantities of liquid, such as a drop of saliva or blood, and has outstanding potential in medical diagnosis, particularly in developing countries - and in the management of animal and crop health across the globe.

“The unique properties of lubricin will allow us to modify microfluidic surfaces - extending their potential applications by offering better functionality,” Prof Haswell said.

“The technology would be so simple, portable and effective that it could be performed by almost anyone in the remotest village. It really could make a difference to the spread of some serious diseases.”

Professor Haswell predicts that within five years, lubricin could be used to functionalise lab-on-a-chip devices capable of detecting viruses from Ebola to flu and a wide range of bacterial infections in a “more stable, robust way.”

“We think it could be at least 50 per cent more reliable, more manufacturable and much more attractive than current methods for commercialisation,” he said.

Dr Greene explained that, among its unique properties, lubricin has a high electrostatic charge that can provide a charged surface in microfluidics.

“Nearly all anti-adhesive coating materials are charge-neutral and give rise to an uncharged surface,” he said.

Dr Greene added that using a protein to test for antibodies would reveal many different diseases, including cancers, which, until now, haven’t been able to be diagnosed through microfluidics – and diseases could be identified sooner.

“It comes down to the signal-to-noise ratio. There will be less background noise, so it will be easier to detect a weak signal,” he said.

The breakthrough is his second discovery in 18 months. In 2014, he became the world’s first scientist to synthetically mimic the most complex lubrication system within the human body - the cartilage lubrication system. 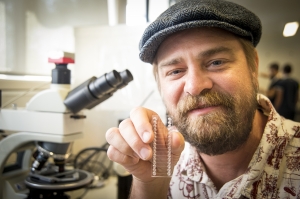