Research news
12 November 2015
A Deakin artist has created a public artwork, in homage to Eugene von Guerard's 1856 'View of Geelong.'

The work is located in Montpellier Park, Highton, which is believed to be the site where von Guerard painted “View of Geelong,” now a centrepiece at the Geelong Gallery.

Commissioned by the City of Greater Geelong, “View of Geelong: Trans Panorama, Ruin and Viewin’” was officially launched on November 9 by the Director of Geelong Gallery, Geoffrey Edwards.

“The detail within von Guerard’s painting and its vision of another time have given it a special place in the imagining of the region,” said Dr Bishop.

A lecturer in Visual Arts in the School of Communication and Creative Arts, Dr Bishop tends to create art that “appropriates cultural artefacts” - borrowing from paintings, films, spaces etc – “to disturb conventional ways of seeing and experiencing the world… and defamiliarise the territory.”

To create the work, he and Simon Reis drew on very old technologies – the camera obscura (a darkened box that was a precursor to the camera) and the stereoscope (which merges the left and right images) – placed beneath a concaved bowl inside a ruined fireplace.

The two artists liaised with various stakeholders in the creation of the work, ensuring they were sensitive to the original painting, the site and the community around which the work is situated.

They employed a recent Deakin Honours Graduate, Jenny McElwee, as research assistant to work on the project. Ms McElwee lives nearby and has taken a great interest in the history and archaeology of the site in her own artwork, as well as the methods von Guerard used to create his iconic work.

According to Dr Bishop, the camera obscura “mimics the mechanics of the eye, and is able to capture the scene perfectly, while the stereoscope splits the scene, making it partial, layered and temporal.”

“The technology provides a confluence of images, both real and imagined, that challenges the viewer’s relationship to the scene,” he said.

“In doing this, we layer von Guerard’s view with change, acknowledging the effects of European civilization and suburbanization of the landscape. The creeping suburbs can be seen on the left side of the stereoscope through the camera obscura, while on the right, the light is captured to reveal a transparency of von Guerard’s original work.” 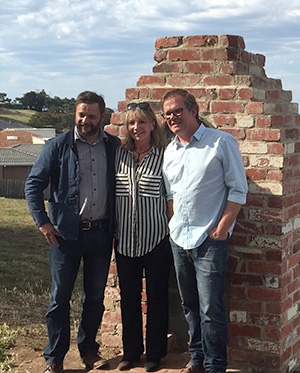 At the launch of the new 'View': Dr Cameron Bishop; Ms Kaz Paton, Manager of Arts and Culture, City of Greater Geelong; and Mr Simon Reis.