A Deakin historian’s pioneering work on the nation’s ancient past and the history of Australian archaeology has contributed to a rewriting of our national story.

Deakin University historian Mr Billy Griffiths is being acclaimed by Australian historians and archaeologists for creating a new understanding of Australia’s ancient past and an enlarged “historical imagination”.

In his new book “Deep Time Dreaming: Uncovering Ancient Australia,” Mr Griffiths follows the journeys of a number of Australia’s archaeological pioneers and charts the development of the field of Aboriginal archaeology, and the shifting cultural and political climate in which it has emerged.

“’Deep Time Dreaming’ is a history of the people and places that have shaped our understanding of ancient Australia,” Mr Griffiths said.

“It is also the story of Aboriginal leaders and their fight to be involved in decisions about their land and their heritage.

“As a historian, I have always been keenly aware of the limitations of documents, which only go back a few centuries on this continent. But this is not where Australian history began. We now know that this country’s Indigenous history extends over 60,000 years.

“Perhaps a billion people have called this continent home. They thrived in the extreme aridity of the central deserts and hunted in the glacier-filled gorges extending from the Tasmanian ice cap. They watched lakes dry, volcanoes erupt, dune fields form and the sea level rise by 125 metres. Theirs is a remarkable story of transformation and resilience.”

Former Australian of the Year, palaeontologist, Dr Tim Flannery, and Dr Mike Smith, Director of Research and Development at the National Museum of Australia, have both welcomed the book, with Flannery describing it as “the freshest, most important book about our past in years,” and Dr Smith welcoming “a brilliant and reflective history of Australian archaeology in its ‘Elizabethan age of exploration,’ when discovery of a continent’s deep human past changed a nation’s historical imagination. Well researched and scholarly, this book is timely as it is written just as this pioneering generation of archaeologists are themselves passing into history.”

Mr Griffiths joined the Alfred Deakin Institute for Citizenship and Globalisation in 2017 as a research fellow, after completing his PhD at the University of Sydney. He has already established a reputation as one of Australia’s most promising young historians, authoring the book “The China Breakthrough: Whitlam in the Middle Kingdom, 1971” in 2012 and co-editing “The Australian Archaeologist’s Book of Quotations” in 2015.

He noted the book is the first history of Australian archaeology written by a non-archaeologist, with the observations of an outsider/historian providing unique insights.

“As I’m not an archaeologist, I had to earn a place on my first archaeological excavation in 2012 as the camp cook,” he explained.

“By day, I would trawl through ancient kitchens, and, by night, I would cook for a team of hungry archaeologists.”

This informal archaeological apprenticeship took Mr Griffiths to sites across Australia and gave him insights into the dynamics of archaeological excavations and the relationships archaeologists developed with the land and the Indigenous people with whom they worked.

Mr Griffiths said he hopes the book will help Australians engage with the deep past as a transformative human history, not just an old date.

“I hope this book helps Australians understand the incredible variety of societies that have lived here over tens of millennia, and the ways in which they made this country their own through language, song, story and fire,” he said.

He also highlighted the challenges of living in a land of great antiquity, with its complex questions of ownership and belonging.

“The deep past is also a living heritage,” he said. “We cannot engage with the past 65,000 years of Australian history without acknowledging the turbulent road of the past two centuries.”

“The book investigates a twin revolution: the reassertion of Aboriginal identity in the second half of the twentieth century, and the uncovering of the traces of ancient Australia.

“It is about a slow shift in national consciousness: the deep time dreaming that has changed the way many of us relate to this continent and its enduring, dynamic human history.” 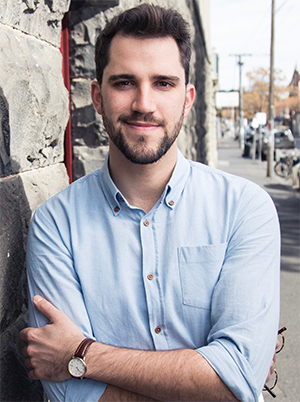 Mr Billy Griffiths joined the Alfred Deakin Institute for Citizenship and Globalisation in 2017 as a research fellow, after completing his PhD at the University of Sydney.