Extolled by the science community as “the Holy Grail of modern biomedicine,” the gene editing tool CRISPR/Cas9 is taking Deakin’s multi-talented anthropologist Eben Kirksey on a journey around the Globe, exploring its many applications and potential consequences.

The potential of the CRISPR/Cas9 gene editing tool is causing universal excitement among scientists from sectors such as medicine, pharmaceuticals, agriculture, food, biofuel and biomaterials. Companies in China, the USA, UK and other countries are investing billions in research dollars to develop applications. Yet, anthropologists and bioethicists are urging the need for caution, in the face of a technology that could have far-reaching consequences for humanity.

Discovered in 2012, CRISPR/Cas9 is a system found in bacteria that acts in immune defence. The tool works by cutting through DNA like a pair of molecular scissors. It can permanently change the genetic code of a living organism, animal or plant. The process draws on a cell’s own DNA repair mechanisms to insert, edit or delete genes with unprecedented precision. It acts on the genome – the complete set of genes or genetic material present in a cell or organism.

Scientists are predicting that it could be used to develop rapid cures for a broad range of diseases; initially, blood diseases such as beta thalassemia, haemophilia and sickle cell disease (as they contain a single sick gene), and, in the longer term, conditions such as leukaemia, HIV, muscular dystrophy, cancer, malaria, heart disease and deadly genetic diseases.

Deakin’s new Associate Professor of Anthropology, Eben Kirksey, is on a mission to build understanding of the implications of the technology. He argues that global measures need to be in place to protect humans from unexpected risks.

Associate Professor Kirksey has already attended conferences in Europe, the United States, and China where biologists presented cutting-edge research on CRISPR. Departing from this basic research, he is asking the difficult questions relating to its use.

“With CRISPR, scientists can cause changes in DNA in humans, plants and microbes,” he said. “In humans, factors like eye or hair colour can be manipulated, so we have to consider if there is the potential to create a more homogenous group of people in the longer term, or if there is a risk that by manipulating DNA we are further exacerbating social inequalities. CRISPR could be used to normalise the human species – making people who are faster, better, and stronger – or it could be used for more creative applications.

“CRISPR has already been used to create new hybrid biological entities – plants, animals, and microbes with synthetic DNA copied from other species. These living creatures illustrate possible futures for the human species. Speculation is an important dimension of all scientific enterprises.  But, the hopes and hype emerging around CRISPR should be regarded with some scepticism. The original Human Genome Project has yet to produce many clinically meaningful outcomes, despite earlier hopes and speculation about the power of DNA.”

Chinese scientists were the first to genetically modify a non-viable human embryo with CRISPR in 2015, and clinical trials with CRISPR and other gene editing technologies are already under way.
Associate Professor Kirksey joined the Alfred Deakin Institute for Citizenship and Globalisation early this year, from his position as Program Head (Convener) of Environmental Humanities at the University of NSW (UNSW). He first came to Australia from the USA in 2012 to undertake an ARC Discovery Early Career Researcher Award (DECRA) at UNSW, and returned to the US in 2015-2016 as the Currie C and Thomas A Barron Visiting Professor at Princeton University.

He has published three books: “Freedom in Entangled Worlds” (2012) and “Emergent Ecologies” (2015), both with Duke University Press, and the edited collection: “The Multispecies Salon” (2014). He is working on a new book – on the future of the human species that includes his findings on CRISPR.

Fascinated by many other disciplines, including art, environmental science, performance and psychology, Kirskey said the collaboration between environmental and humanities disciplines and other cross-disciplinary initiatives at Deakin, such as the Science and Society Network, attracted him to Deakin.

“These initiatives are very exciting and the most likely way for society to find solutions to complex challenges,” he said.

A high-profile anthropological innovator – being acclaimed as one of the world’s most promising young anthropologists – Associate Professor Kirksey has shifted some of his anthropological research energies to the field of chemo-ethnography. His research on CRISPR draws on a broader practice he identified in anthropology as researchers have started to “follow the molecule” through “dreamworlds, growing pharmaceutical markets, and landscapes haunted by industrial capitalism”. His recent paper “Chemo-ethnography: an introduction,” explores how “chemicals have seeped into the ethnographic imaginary”.

“This relationship is often highly complex. In relation to toxins, for instance, it is ironic that chemotherapy uses a material that is actually a poison to cure cancer. I am interested in how industrial toxins like lead have a lasting effect on the landscape. Many ethnographers have started to trace ‘the material, toxicological, and neurological valences’ of chemical species. Technology allows us to do this. A cheap $20 sensor and smartphone give us the capacity to study chemicals in water, soil, air or human bodies.”

His research has transformed his perspective on time. While some chemical species, such as salt molecules, may quickly change state, others, such as “the isotope Bismuth-209 endure for timescales that are virtually unimaginable”.

“Some time scales of chemical forms are very difficult for humans to understand,” he said. “For instance, Bismuth-209 has a half-life of more than one billion times longer than the current age of the universe. It will last longer than humanity.”

Hope is a theme that unites Eben Kirksey’s current research on CRISPR with his earlier work among indigenous people in West Papua.

“In my current work, I am also exploring how dreams animate science. I’ve long been watching how dreams interact and people hold on to hope. In West Papua people were both talking about their future possibilities and collaborating in the ‘now’. I find very interesting work that takes a dream or vision about the future and brings it into the present.”

A formative influence on Eben Kirksey that sowed the seed for his passion for anthropology occurred during an exchange period in West Papua in 1998 when he was a 22-year-old undergraduate student. He lived with a hunter gatherer community and was amazed by the villagers’ optimism and resilience in the face of turmoil and dislocation. He returned to West Papua, while studying as a British Marshall Scholar at Oxford University, and a doctoral student under James Clifford at UC Santa Cruz, to study a popular indigenous political movement in West Papua. He followed the West Papuan activists’ protests in the British Parliament and testified, himself, in the US Congress after witnessing a massacre.

“Following indigenous political movements intrigued me. I was amazed at the strategies people use to maintain hope, particularly through imagination and the prospect of a ‘better future,’ even though their causes may seem hopeless to outsiders,” he said.

“With all my research, the common theme is concern with the future, the role of imagination and concrete possibilities of hope. With the advent of CRISPR, our technical capacity is outpacing our critical thought and ability to implement measures to control it. We need to ask questions on a bigger scale and global perspective about what should be done.

“We also need to ask: ‘Who has the power to use imagination?’ Currently, a lot of research in biosciences is being driven by the bottom line and asking how specific companies can make money. Bioethicists may be in the room, but certain visions aren’t funded or are given less priority.” 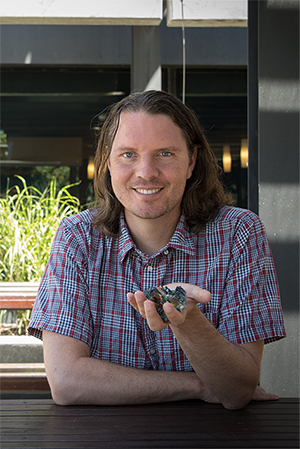 Deakin's new Associate Professor of Anthropology, Eben Kirksey, is on a mission to build understanding of the implications of the technology.