IS' destruction of cultural heritage in Iraq and Syria shocked the world but Dr Antonio Gonzalez Zarandona argues similar destruction has occurred to landscapes sacred to Australia's Indigenous populations it's just that it hasn't been articulated using the language of iconoclasm.

Dr Gonzalez Zarandona, from the Alfred Deakin Institute for Citizenship and Globalisation will talk about the concept of landscape iconoclasm – the destruction of Indigenous Cultural Landscapes - in two specially invited seminars at Oxford and Sheffield Universities in the UK.  He will also deliver another invited seminar on cultural iconoclasm at Birmingham University.

The trip has been made possible thanks to a travelling scholarship from The Australian Academy of the Humanities.

It follows on the heels of a prestigious invitation to deliver a paper to more than 500 art historians at the "Olympics of Art History" - the 34th World Congress of the International Committee of Art History in Beijing which has ties with UNESCO and UNESCO’s academic arm, CIPSH (the Conseil International de la Philosophie et des Sciences Humaines). Dr Gonzalez Zarandona talked to delegates about the changes in the methods used to aesthetically appreciate rock art around the world.

Dr Gonzalez Zarandona connected iconoclasm and the destruction of Indigenous Cultural Landscapes during research for his PhD.

"Basically certain landscapes are seen as sacred by a particular community because that community considers them to be a holy site or a place for pilgrimage" he explained.

"In other cases a feature is considered sacred because it is marked by rock art.  However what has gone unrecognised is that rock art is surrounded by a natural landscape."

"In Australia Indigenous groups consider certain landscapes as sacred because it forms part of their Dreamtime and as such is integral in creating a close connection with their ancestors."

Dr Gonzalez Zarandona’s argument is that destruction of the landscape is a form of iconoclasm.

"Iconoclasm is the destroying of monuments, images or religious icons for religious or political reasons," he said.

Researchers argue for an act to be considered an act of Iconoclasm the image in question  has to have a body, an image and a medium.

"The argument has been that the destruction of landscapes was not an act of Iconoclasm because there was no body involved and a landscape could not be considered an image."

"Through my fieldwork in Murujuga in the Dampier Archipelago in Western Australia – the largest archaeological site in the world - I was able to demonstrate that this was not the case."

Dr Gonzalez Zarandona said for the Indigenous community, the landscape was more than a natural landscape.

"Where rock art has survived there are indeed images but the landscape that surrounds it is formed from the bodies of their ancestors," he said.

"By destroying it we are committing acts of landscape iconoclasm."

Dr Gonzalez Zarandona said the talk on landscape iconoclasm is closely linked to his other talk on IS’ cultural iconoclasm for Birmingham University.

As part of the trip, Dr Gonzalez Zarandona, will have access to Oxford’s School of Archaeology’s database of heritage destruction in the Middle East and North Africa.

His insights will inform a Deakin University project and database of heritage destruction in Iraq and Syria being led by Associate Professor Ben Isakhan and Dr Taghreed Jamal Al Deen.

"My other seminar will talk about our work particularly the destruction of the cultural heritage of the Yezidis and Christians in Iraq," he said.

"Our argument is that this too amounts to Iconoclasm because it is the destruction of sacred and holy images and sites which are regarded by those communities as sacred and important for rituals and other forms of social interaction."

Dr Gonzalez Zarandona said such acts were usually labelled as destruction or vandalism by the public.

"But it is important that they are labelled as Iconoclasm because it is through this concept that we can untangle the nuances as well as the moral and ethical implications of the destruction." he said. Furthermore, he argues that vandalism is just blanket term that does not do justice to the destruction of cultural heritage and art, because acts of vandalism are usually considered acts of wanton destruction, whereas iconoclasm is a destruction with a meaningful purpose behind, even if this purpose is not clear at first sight.

"In the case of the Yezidis and Christians the obliteration of their sites is consistent with IS fallacious idea that stipulates that the heritage of minority groups in the Middle East should disappear in order to fulfil one of their aims: that of creating a caliphate." 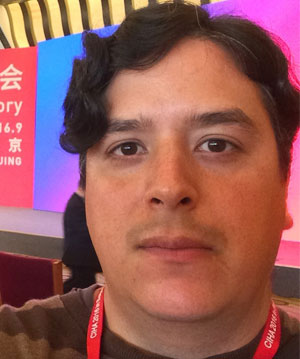 Dr Gonzalez Zarandona connected iconoclasm and the destruction of Indigenous Cultural Landscapes during research for his PhD.