A major grant from the Wellcome Trust will allow researchers to take Deakin-designed silk eardrums to clinical trial.

The innovative silk membrane implants designed by researchers at Deakin University and Ear Science Institute Australia (ESIA) as a treatment for perforated eardrums are a step closer to becoming a reality, thanks to a grant from the UK Wellcome Trust, worth just under $4 million.

The grant will allow the researchers to take the membranes to human clinical trials.

The Deakin research team will finalise the development and specifications of the silk membrane implants and supervise manufacture of the devices to be used in the trials, which will be coordinated by ESIA from next year, and will demonstrate how the membranes behave in the environment of the middle ear.

If all goes as planned, the devices could be on the market within a decade.

The devices have outstanding potential to make a difference to people’s lives. Chronic middle ear disease – and the resulting perforated eardrums – affects millions around the world, reducing hearing and causing complications, including infections, which take the lives of nearly 30,000 people every year, particularly in the developing world.

Researchers from Deakin’s Institute for Frontier Materials (IFM), Dr Rangam Rajkhowa and Dr Ben Allardyce, developed the silk-based membrane materials, with support from an Australian Research Council Linkage Project and the Council’s new Future Fibres Hub (based at Deakin), along with ESIA.

“We are absolutely delighted to have received this important award, which really demonstrates just how vital our research is,” Professor Wang said.

“Up to 330 million people worldwide suffer chronic eardrum perforation as a result of infection, leading to hearing loss.

Dr Allardyce explained that, if the clinical trials prove successful and the implants reach market, they could be inserted via a short surgical procedure.

“The unique qualities of silk mean that no other incisions will be required on patients, unlike current practice, where a patient’s cartilage is often used as a graft over the eardrum,” he said.

“Another important benefit is that silk is transparent, which allows the surgeon to see if there is infection in the middle ear.”

The silk membranes have a number of other favourable properties. They are: thin and able to vibrate like the natural eardrum; biocompatible; strong enough to resist inner ear pressure; easy to shape and manipulate during surgery; and they biodegrade when the eardrum has regenerated over a few months.

Wellcome exists to improve health for everyone by helping great ideas to thrive. We’re a global charitable foundation, both politically and financially independent. We support scientists and researchers, take on big problems, fuel imaginations and spark debate. 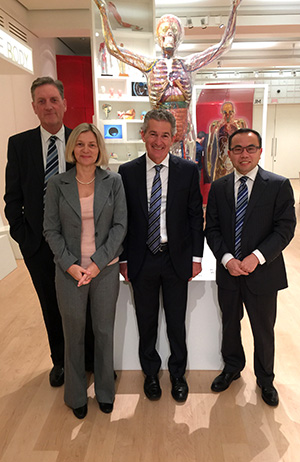 A Deakin PhD graduate's passion for medical research has led him from his home in India to Australia and now to the United States.