In Australia only 16 per cent of STEM graduates are women. A Deakin University/Victorian Government forum has progressed the conversation on how Government, universities, schools and industry networks can attract and improve support for women working in STEM.

There are multiple challenges in attracting women to pursue careers in science, technology, engineering and maths (STEM). One is an image problem. If you type "science" into Google Images, you will find a myriad of test tubes and light bulbs, and a few photos of space. If you ask children to draw a scientist, they will draw a man in a lab coat. These stereotypes feed community perceptions of STEM.

"We know it’s not easy. It requires systemic, organisational and society-wide effort. In the life sciences half the PhD graduates are female, but less than one in five proceed to senior levels. In physics, maths and engineering, we can’t persuade women to enter these courses.

"The number of women in these subjects has declined since the 1990s. We need to recognise the structural and societal disincentives more broadly and share the opportunities and benefits of diversity for staff, students and communities in India and Australia."

"It’s how we normalise science, and make it not 'other'. All areas of society benefit from diverse viewpoints, expertise and life experience," said Professor den Hollander.

"Probably the most significant issue for us is to address gender bias and stereotypes, and we need to address the leaky pipeline."

The forum was attended by representatives from academia, business, government, schools and others seeking solutions to the gender imbalance in STEM. Panellists included representatives from Deakin, Microsoft, Tata Consultancy, the Australian Academy of Technology and Engineering, BrainSTEM and Melbourne Girls' College, amongst others.

The world’s STEM workforce needs can’t be met by only 50 per cent of the population. The economic imperative for greater female participation in STEM is overwhelming. According to Pricewaterhouse Coopers, upskilling just one per cent of the Australian workforce into STEM roles would add $57 billion to Australia’s gross domestic product over 20 years.

Professor Owens noted that the business case for balance is not a contested issue.

"We all know having women in STEM work is better, and research shows that they are more successful in start-ups," she said.

Keynote speaker at the forum, Victoria’s Lead Scientist Dr Amanda Caples, said there are multiple decision points for women when choosing their career paths that appear at primary school, secondary school, tertiary education, and later stages of life, after women may have had children.

"Our careers are the result of multiple reactions over time. Improving women’s STEM involvement is about sustaining them and having different support systems," she said.

"In some quarters, the prevailing view is that we are providing more STEM graduates than there are jobs, but that is a narrow definition of STEM careers. I left the (chemistry) lab bench, but the science skills I learned I still use. STEM provides transferable skills. They are the skills I use every day and the skills I look for in the people I employ. The ability to think and to think broadly makes people better placed to think successfully in changing environments. It’s about economic empowerment, experience and resilience."

Since becoming Lead Scientist, Dr Caples noted that her greatest achievement has been the development of a road map (STEM ecosystem roadmap for educators) that identifies many of the programs available to support and encourage women in STEM.

This ten-year plan emphasises that Australia needs leadership, cohesion, accountability and increased visibility of its diverse STEM talent if it is to improve gender equity. The visibility of female role models and the creation of inclusive and respectful STEM workplaces are crucial. The plan prioritises six opportunities: leadership and cohesion, evaluation, workplace culture, visibility, education and industry action.

"We don’t need to reinvent the wheel," said Dr Caples. "Bringing women into STEM is a complex challenge. Let’s mitigate that by using the Decadal Plan so we’re all singing from the same thin sheet. The plan provides a framework that will be a useful catalyst or co-factor to drive the move towards equilibrium and sustainability."

Universities are already working together to develop cohesive strategies. Deakin was one of the first of the 40 Australian universities who have now committed to the Science in Australia Gender Equity (SAGE) Athena SWAN program. Through this program, Deakin has developed an Action Plan, which addresses gender inequity, with a particular focus on women in STEM. Since the introduction of the Gender Equity Plan in 2017, Deakin has introduced a number of initiatives (such as the Vice Chancellor's Conference Care Support Fund), which seek to retain early and mid-career researchers and help grow them to professional levels. Policies, leave and professional development schemes also target gender issues and tackle issues such as unconscious bias.

"Deakin has applied for the SAGE bronze award and now we have a four-year action plan to show how we intend to further drive change for the better," Professor Owens said.

"But we have to do better, faster. We have to work on creating cultural shifts and embrace inclusivity so everyone feels they belong as much in STEM as anywhere else."

Dr Ellen Moon, a Deakin Lecturer in Environmental Engineering, and one of Science and Technology Australia’s "Superstars of STEM," said that behind the data are the stories of the challenges faced by women, which can be confronting and traumatic.

"It is easy to be oblivious to issues of gender inequity, so in some sense we have a responsibility to share our stories and to get people working together. Sometimes, it seems like problems, such as the lack of flexibility at work, are left to women to fix. But these issues affect people of all genders, so it needs to be a commitment from everyone," she said. 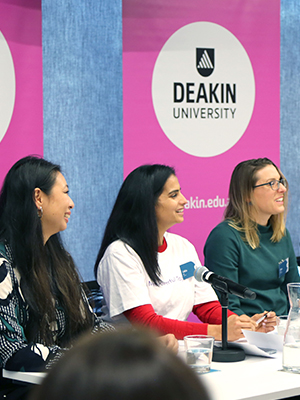 A passion for the environment and education led a Deakin PhD alumnus from a career in marine biology in Mexico to developing innovative educational experiences in Melbourne.

Dr Deonne Basaraba, one of the first two students to receive their PhDs through the Institute of Koorie Education in 11 years, speaks for those affected by Fetal Alcohol Spectrum Disorder.