Visual and communication designers around the world grapple with how to accurately represent Indigenous imagery in their work in culturally appropriate ways.

Now, a new charter being developed by Deakin University researchers Dr Russell Kennedy and Dr Meghan Kelly from Deakin’s School of Communication and Creative Arts (SCCA), Professor Brian Martin, Deputy Director of Deakin’s Institute of Koorie Education (IKE) and students from IKE seeks to provide some guidelines for the industry.

During a recent study tour of Greenland, Sweden and Denmark, the Deakin team met with local Sami and Inuit people, along with prominent industry designers, academics and designers from the University of Greenland (Ilisimatusarfik), the Copenhagen School of Design and Technology, and Greenland House.

The "WAS.IS.ALWAYS: South to North" workshops allowed the researchers and IKE students to learn about the experiences of Indigenous people around the world and include their insights in an International Indigenous Design Charter.

The Charter aims to assist Indigenous and non-Indigenous designers to work together to incorporate Indigenous knowledge, communities and culture in design projects.

Its development follows the creation of the “Australian Indigenous Design Charter: Communication Design” by Dr Kennedy, Dr Kelly and IKE, in collaboration with Indigenous Architecture and Design Victoria, and the Design Institute of Australia.

The Australian Charter outlines ten points for non-Indigenous and Indigenous communication designers and buyers of design to follow throughout the various stages of the design process.

It is based in part on the PhD project of Dr Kennedy, who is Senior Lecturer and Course Director in Visual Communication Design with SCCA.

Dr Kennedy’s research focuses on cultural representation in communication design and the way that Indigenous visual culture and national identity are represented in design.

“The issue of inappropriate representation and misuse of Indigenous culture in communication design is international,” he said.

“There are Indigenous groups facing similar problems in every continent around the world.

“During the "WAS.IS.ALWAYS" workshops, we used the Australian Indigenous Design Charter as a starting point for the development of an international charter, gathering enough feedback and data for a first draft to be presented at the World Design Summit in Montreal next year.”

Dr Kennedy, who is also a filmmaker, said he became aware of the issues surrounding representations of Aboriginal culture, and Indigenous culture around the world, while working on a mini-series about boxer Lionel Rose.

As a designer and former board member of ico-D, he realised the scale of the knowledge gap and demand from the industry for guidance in representing Indigenous design.

“Designers want to be respectful; they don’t want to be inappropriate or offend Indigenous people,” Dr Kennedy said.

“The International Indigenous Design Charter will help them to step through the process from brief to final product in an ethical and appropriate way.”

He added that designers were important in influencing how Indigenous culture around the world is represented.

“They can perpetuate existing stereotypes and clichés or show new ways forward,” he said.

The "WAS.IS.ALWAYS" workshops were hosted by the University of Greenland (Ilisimatusarfik) and funded by the Australian Department of Foreign Affairs and Trade’s Cultural Diplomacy Grant Program. 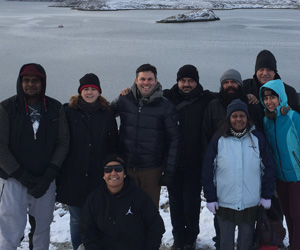