The latest Australian Unity Wellbeing Index survey found average life satisfaction in 2016 hit a record score of 76.7, the highest since the Index’s inception in 2000.

The Index, a joint project between Deakin University’s Australian Centre on Quality of Life (ACQL) and Australian Unity, evaluates satisfaction with life across a range of areas such as standard of living, health, achievement, personal relationships, safety, community connection and future security. A personal wellbeing score out of 100 is recorded.

The 2016 results continued an upward trend that began in 2006, despite a long-term decline in health satisfaction over the last 16 years, and increased concern about the possibility of a terrorist attack.

“These findings reiterate a major theme of the Wellbeing Index over time, which is that satisfaction with one’s health is not a significant driver of personal wellbeing,’’ said Dr Delyse Hutchinson from the ACQL.

“Of greater importance are financial security, a sense of purpose in life and strong relationships.

“We call this the ‘golden triangle of wellbeing’.’’

Dr Hutchinson explained that the domains of standard of living (80.8), safety (82.0), community connection (73.7) and future security (73.3) reached their highest recorded levels, which was interesting when set against the finding on perceived likelihood of a terrorist attack.

The frequency of those who thought a terrorist attack was likely increased by about ten per cent since last year, and was now the highest on record (74.8 per cent of the sample). The strength of this belief had also increased by 7.9 per cent.

Dr Hutchinson said that while the Index did not examine the reasons behind the increasing happiness trend, “overall life satisfaction also runs deeper than our daily concerns about housing costs or job insecurities.”

The survey noted that wellbeing was significantly lower for adults who continued to live with their parents.

“For those living with their parents, average life satisfaction (72.0) is the lowest it has been for ten years,” Dr Hutchinson said. 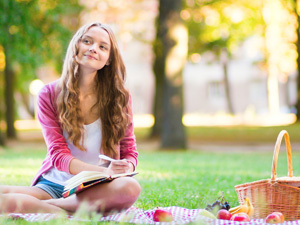 Levelling the field so all can play

A Deakin University program is kicking goals for children with a disability.

A world-first app developed by Deakin researchers in partnership with Australian Unity will help young carers manage their stress.