Deakin and Opera Victoria have pushed the technological boundaries in an Australian premiere.

The 1928 opera “Four Saints in Three Acts” was way ahead of its time – overturning operatic convention with a libretto by Gertrude Stein where the sound of words took precedence over the story.

Now, with 3D visuals like colourful fish swimming across the sky or the sensation of floating through the cosmos within an immersive stereoscopic environment, the Australian premiere has provided a scenography to match by exploiting the possibilities of cutting edge technology.

Co-director of the new production, Deakin’s Professor Kim Vincs, has no doubt that both American composer Virgil Thomson and poet Gertrude Stein would have approved.

“I particularly think that Gertrude Stein would be impressed by what we can do today,” she said.

“The spirit of the production is fun, quirky and surreal. Stein and Thomson were also pushing boundaries. They would be amazed that we can create an immersive experience, where 3D glasses bring the surreal elements to life.”

“Four Saints” is the latest in a series of Deakin Motion.Lab and Opera Victoria collaborations. Its first two performances were sold out weeks in advance.

The show was performed by the Victorian Youth Opera and Youth Orchestra (all aged 15-25) at the Coopers Malthouse theatre.

Professor Vincs is Director of Deakin’s Motion.Lab, which is now recognised as one of Australia’s leading innovators in performing arts and technology. As Co-director of “Four Saints,” she focussed her energies on the choreography and scenography, supported by a Motion.Lab team.

“I am absolutely thrilled that ‘Four Saints’ came together so well, and the audience supported it,” Professor Vincs said.

“This project had a totally different feel from our last co-production – the 2015 Wagner opera ‘Flying Dutchman.’ We’ve been inspired by the characters Gertrude Stein portrayed in her libretto and the music is inspired by jazz, gospel and folk music.

“This is the most complex production we’ve done. The scenography has been designed to give a visual narrative, extending the content onto the screen.”

Artistic Director of the Victorian Opera, Richard Mills, noted the 3D component bore a resonance to Gertrude Stein’s (and her partner Alice Toklas’s) great interest in the visual arts.

The opera challenges religious assumptions. After a choral introduction to twenty saints, a series of tableaux, featuring Saint Teresa II, unfold on the steps of a cathedral. Scenes include: a garden party near Barcelona, where there is a dance and a heavenly vision through a telescope; a monastery garden, where saints discuss monastic life and see a vision; and heaven, where the saints remember their earthly life.

An Australian Research Council Linkage scheme has supported Motion.Lab to work on three operas with Opera Victoria. Their final co-production will be based on a Tom Waits album “The Black Rider: The Casting of the Magic Bullets” – scheduled for late 2017.

For those who missed “Four Saints,” several co-productions are currently being finalised with other innovative arts groups. While the virtual sets for the “Magic Flute” will be touring China, “Inside the Ethereal Eye” will be available to the Victorian public. A musical homage to Walter Burley and Marion Mahony Griffin, this show will be held at the Melbourne International Festival and will feature a gigantic, ultra-high-resolution projection dome, acting as a canvas for an artistic exploration of the Newman College Dining Hall and the ceiling of the iconic Capitol Theatre. 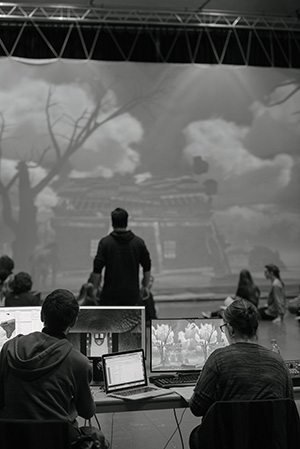 “This is the most complex production we’ve done. The scenography has been designed to give a visual narrative, extending the content onto the screen.”

Poets find their metre at Deakin

Professor David McCooey, who has launched his fourth volume of poetry, has become a beacon in Geelong's literary scene.