For the past 18 months, one of Victoria’s most seasoned bureaucrats has been quietly working on ideas to help transform the Geelong region’s agricultural sector, to capitalise on global markets.

Whether it be tapping into the unused megalitres of water treated at the Werribee Treatment plant, growing high value crops like blueberries, selling small bottles of UHT milk to Asia, or centrally dosing agricultural water supplies with gypsum to grow vegetables in saline soil, David Downie is brimming with ideas for improving Australia’s agricultural productivity.

But he is not just a pipe dreamer. His ideas are grounded in a real understanding of what is achievable.

David Downie brings vast experience to his position as Strategic Advisor to Deakin’s Centre for Regional and Rural Futures (CeRRF). He is the former head of Victoria’s Office of Water, Department of Sustainability and Environment, and Department of Energy and Minerals.

As Victoria’s top water advisor, he oversaw major infrastructure projects, including Victoria’s $750 million North-South Pipeline and $2.1 billion irrigation renovation, among many other projects. He has also played a major role in corporatising sections of Australia’s energy market, including the Snowy Mountain Hydro scheme.

CeRRF is one of Deakin’s newest research centres and has a bold mission - to improve Australia’s regional competitiveness. It is acquiring some of the nation’s leading minds in regional development, water management, and agricultural technology to achieve this aim.

As a strategic advisor to CeRRF, Downie is convinced that Australian agribusiness needs to shift its focus to new primary products, and greater value adding, to improve financial returns.

CeRRF’s number one mandate is to help build regional competitiveness, he explained, through improved agricultural production, and developing smart technologies that can improve efficiencies.

“The time for change is critical,” he said.

“We have moved into a very different world. Today, some areas of production, such as milk - which have been our mainstays - provide a very low economic return, compared to the potential of other products. Farmers only receive about a 2.2 per cent rate of return for products such as dairy, rice or cotton. In contrast, big volume hydroponics, horticulture, or high value products, such as blueberries, would achieve up to three times that return.

“There is no doubt that we need to rethink where we put our energy - either by making more money from a primary product, or value adding - and many businesses should be thinking about upscaling and finding new markets.”

“Deakin’s CeRRF can help regional companies find that space - and we are in a perfect position to do it, employing world leading experts who can deliver the technology and know-how required,” he said.

As to how easily farmers can shift their focus, Downie says that some farmers are more open to change than others, but their successes tend to inspire others.

Employing 11 researchers directly, CeRRF calls on expertise from across Deakin, in areas ranging from engineering, to science, to marketing, to nutrition.

“It is also a matter of bringing all the stakeholders together - pulling together research, business, government and the community - to develop the products and services that can rejuvenate the economy,” Mr Downie said.

As an example of what can be done, two of Australia’s leading experts on how climate impacts agriculture, Victor Sposito and Robert Faggian (now employed by CeRRF) led an exemplary project in Gippsland, involving a consortium of local councils and key stakeholders, that involved developing a four-year plan for farmers to adapt their agricultural practices to the changing climate.

The newly-completed project provides a model that can be applied all over Australia and overseas.

Deakin will be gaining further water management expertise with the appointment of Dr David Halliwell as the new Director of CeRRF. Dr Halliwell, who is currently the CEO of Water Research Australia, has a vast range of experience to draw on and will be joining Deakin in August.

“Now, CeRRF is setting up cross-disciplinary working groups with all players in this region, to develop the technology and research that Deakin is already working on, such as carbon fibre, microfluidics (lab-on-a-chip), or ways of dealing with sodicity (soil salt content),” Downie explained.

“Hundreds of established technologies have been developed through research that are not yet being used in industry. It is our job to bring some of that together – and we know we can deliver.”

“We have seen over 30 years of water reform in Victoria and the state has been practically drought-proofed for urban communities. Deakin now employs some of Australia’s leading water experts and is ideally placed to become internationally recognised in the water management arena,” he said.

“Climate change is having a huge impact on water management around the world.

"We are hoping that we can help to make a real difference in regions like South America, where lack of regulation and poor sanitation are having serious effects on human health and the environment.” 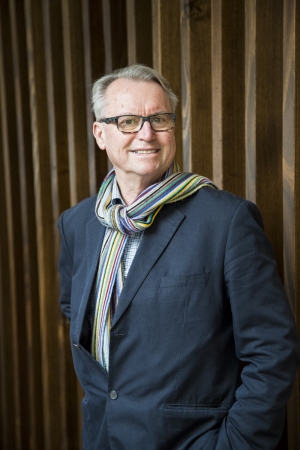 Dr David Halliwell prioritises solutions 'outside the box' at the Centre for Regional and Rural Futures.

A new branch of the Centre for Regional and Rural Futures will foster agricultural productivity.

Shining the spotlight on sustainability

A Deakin University researcher's advocacy for sustainable agriculture and climate change action has led to an award for environmental leadership.