Is the secret to beating flu fast inside ourselves?

New Deakin research has found our bodies could naturally hold the key to a speedy recovery from flu.

According to the World Health Organisation (WHO), seasonal influenza, or “the flu,” is an acute viral infection that spreads easily from person to person through infected droplets in the air and by hands.

Influenza viruses, which are responsible for up to 3,500 deaths and 40,000 hospitalisations in Australia each year, circulate worldwide and can affect people in any age group.

It’s a serious public health problem that strains health services and takes a toll on the economy through lost workforce productivity.

Although vaccination is the most effective way to prevent infection, it can only protect against the major strains of flu, as seasonal flu viruses undergo continuous genetic mutation.

However, new Deakin University research has shown that increasing a naturally-produced enzyme may be the secret to accelerating our immune responses following influenza infection.

The study, by Deakin School of Medicine's Associate Professor John Stambas, found that mice lacking the ability to express an enzyme known as ADAMTS5 showed increased signs of disease when compared to normal control mice.

“We believe this is due to the fact that the ADAMTS5 enzyme is not degrading its target protein substrate [versican] efficiently, making it difficult for immune cells to move and clear the virus,” Assoc Prof Stambas said.

“We found that a subset of white blood cells involved in clearing infection gets trapped in the lymph node closest to the lung.

“As a result, mice have higher levels of virus in their lungs, lose more weight and their immune responses are impaired.”

Death following infection with seasonal flu strains can occur in rare instances, especially in vulnerable individuals (the very young and elderly) as a result of viral pneumonia or from secondary bacterial infections.

“The flu shot offers very good protection against seasonal virus strains, however mismatches between the circulating strain and the vaccine occur from time-to-time, leading to a reduction in its efficacy,” Assoc Prof Stambas said.

“That’s why our research focuses on the host, finding a way for humans to harness an enzyme they already possess to fight back and clear the virus quickly.”

He explained that the next step in the research would be testing if higher levels of ADAMTS5 could be administered or expressed to help speed up cell movement and improve immunity to viruses.

“Hopefully, this will add another option to the arsenal in our fight against the flu,” he said.

Associate Professor Stambas’ report on his research findings, “ADAMTS5 is a Critical Regulator of Virus-Specific T Cell Immunity,” has been published in the latest edition of “PLOS Biology”. 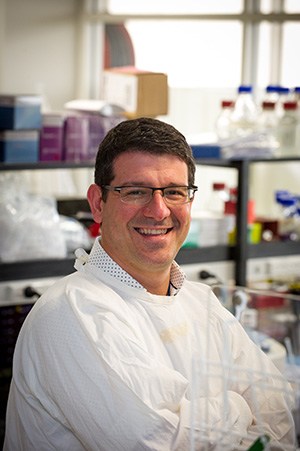 Associate Professor John Stambas has progressed understanding of how we recover from flu.