Recent issues concerning the integrity of Facebook “news” have drawn attention to the risks and influence of unverified “news” stories circulated to billions around the world – coinciding with continued redundancies assailing the journalism profession.

Journalist, member of the Australian Press Council and Professor of Communication at Deakin University, Matthew Ricketson, is leading Deakin’s involvement in the “New Beats” project – recording the personal impact of the waves of redundancies that swept across journalism during 2012 and over the succeeding six years. Over 3000 journalists have taken or been forced to take redundancy packages over that time, with redundancies primarily affecting Fairfax, News Corp, Network 10, but also other outlets.

Concerned about the potential impact of this loss of journalistic expertise, Professor Ricketson and colleagues from three other universities, led by Professor Lawrie Zion of La Trobe University, set up a research project to examine what has clearly been a seismic shift in the mainstream news media.

“I was concerned at the consequences of this,” said Professor Ricketson. “I wanted to document how this affected a generation of journalistic talent and wisdom, and see where it has gone.

“We were interested in whether people who took redundancy packages would reinvent the future of journalism, as more and more traditional jobs have been cut. So far, we have found that a number are engaged in digital start-ups, but less than 50 per cent are back in the field. Some start-ups have worked well and some have fizzled out. Some older journalists have retired, others are working freelance, or in public relations, or academia.”

The four-year project is being funded through Australian Research Council Linkage and Discovery schemes, supporting researchers from La Trobe, Deakin, Swinburne and Sydney Universities, and the University of Amsterdam. The ABC, National Library of Australia and Media, Entertainment and Arts Alliance are industry partners in the project.

Working with the National Library, Professor Ricketson and his colleagues are interviewing 60 former high-level journalists who took redundancy packages, including well-known journalist, political and social commentator David Marr, and award-winning journalist and author Jo Chandler, formerly of "The Age".

Many are not known to the public, but they have contributed up to 35 years in the industry, working as sub-editors, for instance, and performing the important, but now vanishing role of ensuring the quality and veracity of Australian news.

“In the linkage project, we are documenting the effect of the reduction of sub-editors on the industry, as well as investigating the gender spread, age spread, ethnic diversity, location, and medium (radio, TV or print) that individuals have worked in,” explained Professor Ricketson.

“We are conducting comprehensive, four to six-hour interviews, looking not only at the impact of the redundancy, but at the journalists’ whole working lives, which is providing a rich repository of experience and reflection for the library’s oral history collection. Of course, journalists are great story-tellers and so we’re hearing the ‘back stories’ of some of the biggest news events of the past 50 years, as well as the behind-the-scenes stories about newsrooms, whether ‘office politics’ played out in the high-octane deadline environment or the disturbing accounts of sexism that many female reporters have endured.”

The interviews will be made available to the public later this year through the National Library’s Oral History and Folklore Collection.

Professor Ricketson has been actively involved in the media since 1981, and has worked for “The Age,” “The Australian” and “Time Australia” magazine, among other outlets. In 2011-12, he assisted the Hon Raymond Finkelstein QC in a national independent inquiry into the media and media regulation, which was presented to the Minister for Broadband, Communications and the Digital Economy, Stephen Conroy, in early 2012.

“The report found media accountability systems in Australia were weak, but its recommendations for improvement were widely challenged by the industry and then mishandled by the Federal Government in its final months in office, in 2013,” noted Professor Ricketson.

Over the past decade, he has reflected on how to prepare journalism students for the new media landscape, where traditional “news” mediums of newspapers, radio and television account for a declining number of career prospects, compared to opportunities in digital media or public relations.

“We tell students that journalism remains a really important activity in a democratic society,” he said.

“Now, we need good journalism more than ever. The business model is broken, but reader interest is not waning. Advertising has funded journalism to a great degree. Today, much of the advertising revenue goes to Google and Facebook, but those publishers are not in the business of ‘news’ media. For instance, Mark Zuckerberg (Facebook CEO) recently announced Facebook is rearranging its news feed because it doesn’t want to be in the business of journalism.”

The burning issue for the industry concerns the question of “who will fund journalism, especially investigative journalism, whether it be uncovering corruption in councils or corporate wrongdoing?"

“This takes time, resources and skill. We encourage students to consider that kind of work or to look to what is being done in-house. More and more, organisations and bodies, such as AFL.com.au, are making their own media and their own communications, which requires journalistic skills. These organisations employ a large number of journalists, although they don’t do investigative research," Professor Ricketson said.

Professor Ricketson is also a strong advocate for literary journalism, which offers significant career potential for talented journalists. Literary journalism is long-form journalism that covers true stories, but reads like fiction and has the appeal and emotional impact of fiction. Much of it is published these days in books, such as  Chloe Hooper (“The Tall Man”), Anna Funder (“Stasiland”), David Marr and Marian Wilkinson (“Dark Victory”) and Louise Milligan (“Cardinal: the rise and fall of George Pell”).

“News is, of course, important. To read, though, it is dry, factual and formal. If you find and develop an interesting story through literary journalism, you get a level of engagement with the reader/viewer that can be much more profound,” Professor Ricketson said.

“In early 2018, for instance, one of the biggest news stories – on issues relating to Donald Trump’s leadership – generated the book 'Fire and Fury' by Michael Wolff. Questions were asked about Wolff’s ethics, and rightly so, but it remains true that his irreverent, yet knowing narrative style gave readers the feeling they were deep inside the chaos of the Trump White House.

“I am also building connections with other academics at Deakin to form a ‘coalition of interest’ on digital, long-form story-telling.

“This kind of deeply-researched story-telling and way of explaining the world can, and should, be one of the solutions to the necessary superficiality of news media and the hyper-partisan ‘screaming and yelling that goes on in public discourses.

“Podcasts are also becoming extremely popular. When people listen to podcasts, the aural effect bypasses the intellect and has a more emotional impact on the brain. The podcast ‘Serial,’ where the narrator takes us on a journey in criminal proceedings, was hugely popular.

“False facts and propaganda have always been with us. What is new today is the way online media enables the fast spread of false facts and the way that social media ramps up an atmosphere of anonymous abuse, such as when women are targeted on the basis of their gender.

“This is a serious problem facing society across the globe, but I have faith that there has always been, and always will be, a large number of people who want to be presented with accurate, artfully-presented information and want to engage in stories, in order to help them live their lives.”

More information:
New Beats: A study of Australian journalists who became redundant during or since 2012.
National Library of Australia, Oral History and Folklore Collection. 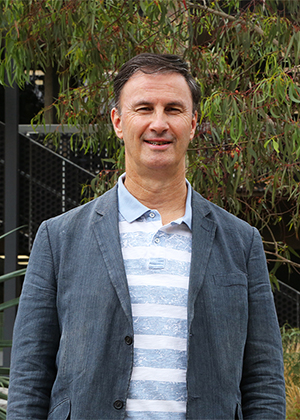 Professor of Communication Matthew Ricketson is leading Deakin’s involvement in the “New Beats” project – recording the personal impact of the waves of redundancies that swept across journalism during 2012 and over the succeeding six years.

A Deakin artist has created a public artwork, in homage to Eugene von Guerard's 1856 'View of Geelong.'