Research news
15 April 2015
A novel sensor is set to help extend the operational life of energy pipelines by decades.

Three new research projects funded by Australia’s energy pipeline industry have been initiated at Deakin University. The projects aim to develop a world-first pipeline health monitoring system that will be based on a high tech sensor developed by Deakin researchers.

The Deakin Corrosion Research Centre has been granted about $1 million by the Energy Pipelines Co-operative Research Centre to progress the sensor technology through a three-year development phase - leading to commercialisation. The researchers will also use the funds to undertake extensive modelling of corrosion under disbonded coatings.

Co-Director of the Deakin Corrosion Research Centre, Professor Mike Tan, explained that the unique sensor-based pipeline health monitoring system should help the industry to extend the lifespan of pipelines by decades.

“Pipelines are a multi-billion dollar asset within Australia,” said Professor Tan. “They were designed to last for 30 to 40 years, and many of Australia’s oil and gas pipes are near the end of that timeframe, but the companies would face huge difficulties and expenses if they were to replace them.”

“The energy pipeline industry has a ‘dream’ to economically extend the safe operational life of their pipelines to 100 years. I believe that our technology will help them to achieve it.”

“High pressure underground pipelines are typically protected against corrosion with a combination of barrier coatings and cathodic protection systems,” he explained.

“When their coatings become ‘disbonded,’ due to the effects of various chemical, electrochemical, electrical and environmental factors, pipelines become susceptible to corrosion that can eventually lead to leaks or catastrophic failure.”

Professor Tan explained that currently a common method to detect corrosion is ‘smart pigging,’ where a testing device (known as a pig) is inserted into the pipe and carried along by the fluid flow. However, this is expensive and is usually only carried out at intervals of at least five years.

“The sensors will play an important role in complementing that technique, with a focus on the outside of the pipes, where most of the underground pipeline corrosion tends to occur,” he said.

The sensors will be able to be placed in the ground, near the outside of existing pipes, and will provide continuous, real-time monitoring of the efficiency of cathodic protection, coatings and corrosion. They will allow the monitoring, modelling and prediction of when and where corrosion damage would likely occur in years ahead, to enable better and more efficient maintenance practises (and cost savings).

They will use wireless or satellite technology to alert companies when issues occur.

“The sensors will be highly versatile,” said Professor Tan. “They can be designed to be suitable for oil and gas pipelines, underwater pipes, desalination plants, bridges, large structures, or even submarines.”

Extending the operational life of infrastructures, such as energy pipelines, has become a major driving force for research, backed by industry. Deakin’s Corrosion Research Centre has received strong support from the Energy Pipelines CRC and the Australian Pipeline Industry Association, which represents Australia’s 50 major pipeline and related companies, and played a key role in its establishment. 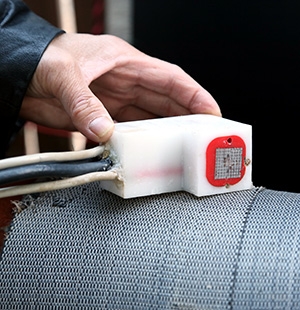 The sensors will not only provide continuous monitoring, but will predict when and where corrosion is likely to occur in years ahead.