A new approach is showing promise for improved treatment of prostate cancer, other cancers and diseases such as tuberculosis.

Cancer of the prostate is the highest diagnosed cancer in men and accounts for almost a third of all cancers diagnosed in Australia - causing the deaths of significantly more men each year than breast cancer in women. Over 3,200 Australian men die from the disease each year.

Deakin’s Dr Luke Henderson, a Senior Research Fellow in Materials Chemistry and his research team, including students Jarrad M. Altimari and Samantha C. Hockey from the Institute for Frontier Materials, have been working to molecularly evolve the best prostate cancer therapy candidates available.

The Deakin researchers have been collaborating with colleagues from Bond and Monash Universities on the project.

Dr Henderson’s research was funded by Deakin’s first grant from the Community for Australian Scholarship and Science (CASS) foundation. It has recently been published in the journal “Bioorganic and Medicinal Chemistry Letters.”

The researchers have synthesised 50 previously unknown molecules, which have been investigated for their anticancer activity.

“It is still preliminary research, but it is very promising,” said Dr Henderson. “We have developed a new range of prostate cancer therapeutics which are able to be synthesised in very high yield and short reaction times. These molecules display anticancer activity similar to the current gold standard therapies used worldwide.”

“Incidence of prostate cancer increases with age – so it is a major concern for society, particularly with our aging population.”

He explained that the front line therapies for prostate cancer are effective for treating early onset prostate cancer, although they do have unpleasant side effects, such as erectile dysfunction, jaundice and nausea, but the later stages of the disease are very hard to treat.

“The current drugs require lengthy and inefficient synthetic procedures and, because they are rapidly decomposed by the body, they require high doses at frequent intervals,” he added.

“The development of cheap, reliable, and widely available chemotherapeutic agents would have massive ramifications for future drug design in cancer drugs, particularly those that target hormone dependent primary cancers (such as Breast, Prostate, Testicular, Ovarian, etc) and potentially other diseases.”

Furthermore, the drugs have been tested against late stage (castration resistant - CRPC) prostate cancer, with a few compounds being found to be potentially more effective than current chemotherapy drugs.

Dr Henderson cautioned, however, that his research is still a long way from the clinical trial stage.

“We are now at the starting point for stage two, which will involve optimising the family of effective compounds over the next two years,” he said.

“Like many areas of science, we have to take one step at a time. If the next stage proves successful, we will then develop more serious models that examine how the molecule is absorbed, distributed and metabolised by the body.” 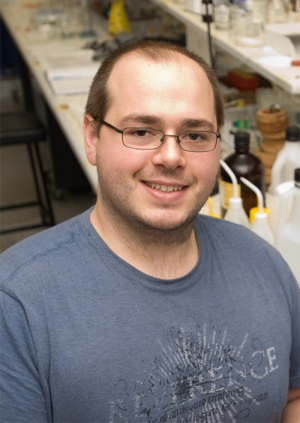