The project illustrates how the use of new technologies can create more dynamic and engaging avenues to promote the sciences, as well as renewed interest in historical artefacts. A particular focus of the study is “how we can use virtual reality (VR) and 3D printing to help with providing educational experiences in a museum context,” Dr Horan said.

"In the past, when going to a museum, how could people immerse themselves in a dinosaur's habitat and get a feeling of what it would be like to be one of these creatures? VR can show us elements of a dinosaur's life that wasn't previously possible," Dr Antlej said.

Dr Horan said the team was working to create the VR experience using 360-degree video, illustrating both a present-day scene, as well as a historical view from the era of the dinosaur.

"When the users put on a VR headset, they will be immediately immersed into a dig site. After a while, a fern tree forest will appear, together with a 3D model of a Leaellynasaura," he said.

"We are very excited to not only provide visitors with an immersive VR experience, but allow them to touch and play with the dinosaur model, which normally isn't possible."

According to Dr Antlej, the 3D model will be very detailed and lifelike. "We are doing experiments on how we can best print dinosaur-like skin so people will not just feel the geometry, the size and the scale, but also the contour of the skin."

The aim is to achieve a scaly texture akin to an eastern blue tongue lizard.

The key figure in the project, the Leaellynasaura, is one of the most complete dinosaur skeletons discovered in Australia.  The species lived in the Otways region of Victoria around 100 million years ago. The first remains were uncovered in the 1980s, in what used to be a Gondwanaland river bed, now known as Dinosaur Cove.

The project team recently had the rare opportunity to visit the paleontological dig site, which will further inform their methods, and the benefits of the final outcome. According to Dr Horan, "in the case of the dig, this environment is difficult to access, so we can take this excavation here and take it to people who may not otherwise get the experience."

That outcome of this collaborative project will form part of an exhibition at the National Wool Museum in Geelong later this year. 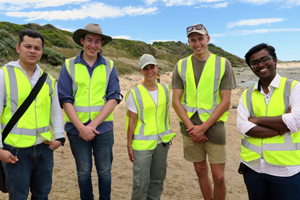